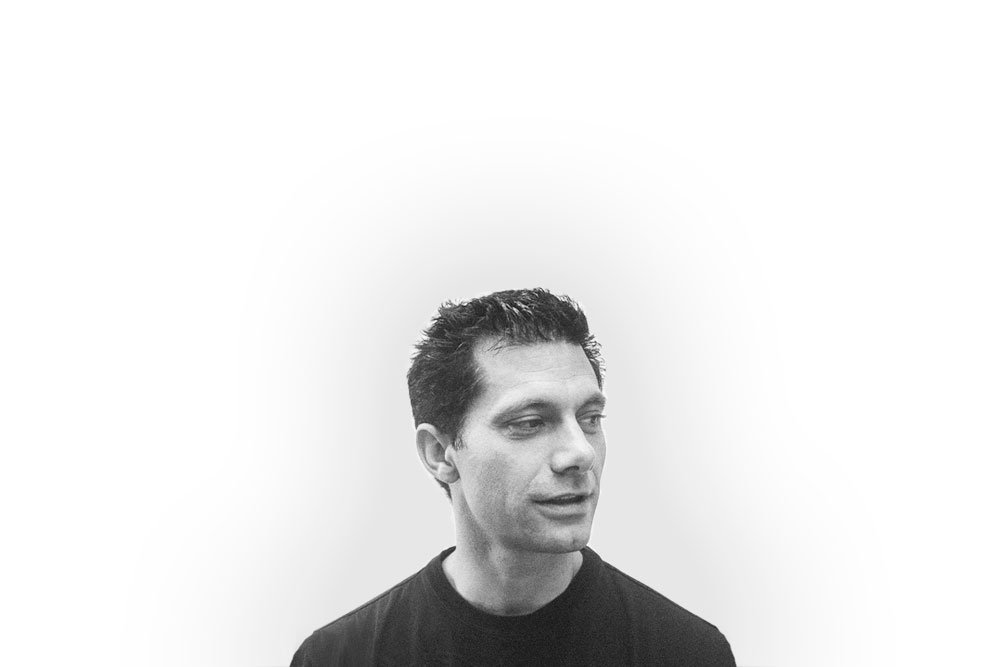 Wonder what it’s like to be a designer at a tech company that truly values design? We invite you to take a peek into one of our Bridge partners, Pinterest, through the eyes of Jason Wilson, Lead Product Designer.

Jason has worn many shoes as a designer. He’s contributed to the teams at Adobe, Facebook, and more recently as a Senior UI Designer at Apple and Creative Director at Lytro. When he joined Pinterest nearly a year ago, he could have gone anywhere, but it was the unrivaled passion of Pinterest’s designers that convinced him to make the move. As Pinterest’s Lead Product Designer, he’s spearheaded designs for the current iPad app and website and is currently working on the iPhone redesign.

Join us as we walk through a day in the life of Jason Wilson. 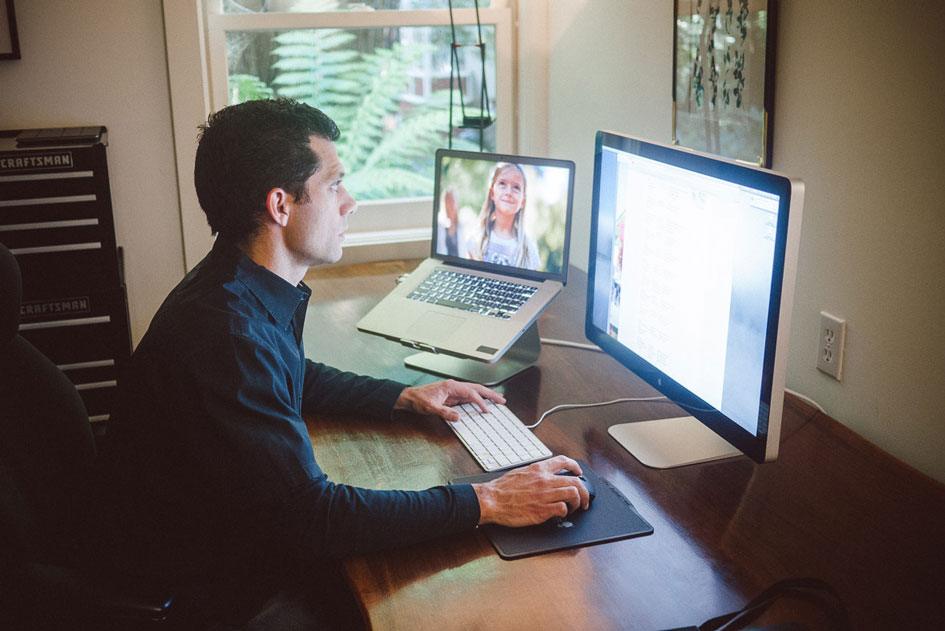 Jason at his desk in his soundproof “bunker.” He’s most productive at home and usually between the hours of 11 PM to 4 AM. He makes it a priority to be with family, even during those 20-hr days. He just doesn’t sleep much.

Where do you find inspiration?

“I think the core of it actually comes from my family — my daughters, most specifically, just because they see the world so differently. I’ve never really fully grown up, and it helps me keep that really curious, inquisitive, kinda naive mind. I actually think a lot of those qualities are really helpful when you go about building a new product, for example, to look at it with fresh eyes, and not be jaded with what’s the industry doing or what have they done before on that particular product.”

Japanese and Swiss design are a second source. “Growing up, my parents were insanely into Asian art. When I say insane — my dad spent three out of four weeks in Asia, when I was growing up. He worked for Coca-Cola. He had a really big Asian art collection that he collected over 50 years. In Japanese design, anything that’s not essential shouldn’t be there. I like the conceptual idea of removing everything, everything, everything that’s not needed and letting the content be the absolute king.”

“I love, love, love Swiss design — old Swiss design from the ‘50s and ‘60s. In particular, the one person, bar none, who gives me more inspiration than anyone is a guy called Josef Müller-Brockmann and his grid systems. Just the way in which I think and work is very aligned to grid systems. A lot of my career, I’ve been known as the grid-system guy.”

The third inspiration is photography. “I have a completely manual focus — I am a Leica guy. I really love the storytelling because it’s so hard to take the photos. With the Leica, I’ll look at my daughter, see her in her environment, and what I don’t consciously put in the focus becomes very much a beautiful sort of texture, and it’s very conscious. I think it influences me a tremendous amount. If I look at correlation, say, in how I go about product design, I am so off-the-wall different than anyone I’ve worked with. I never start in Photoshop. I don’t wireframe in the wireframe programs. I draw.” 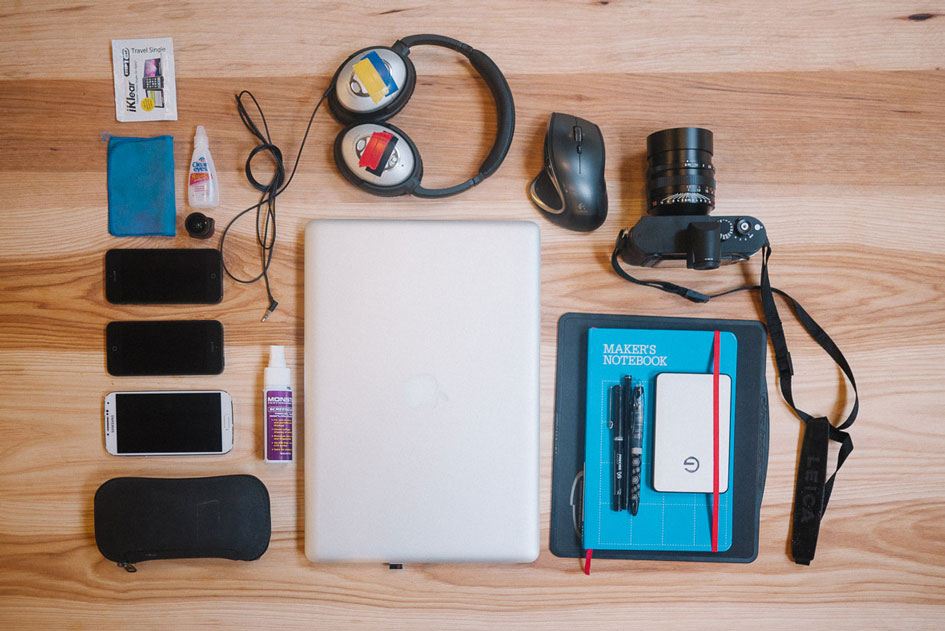 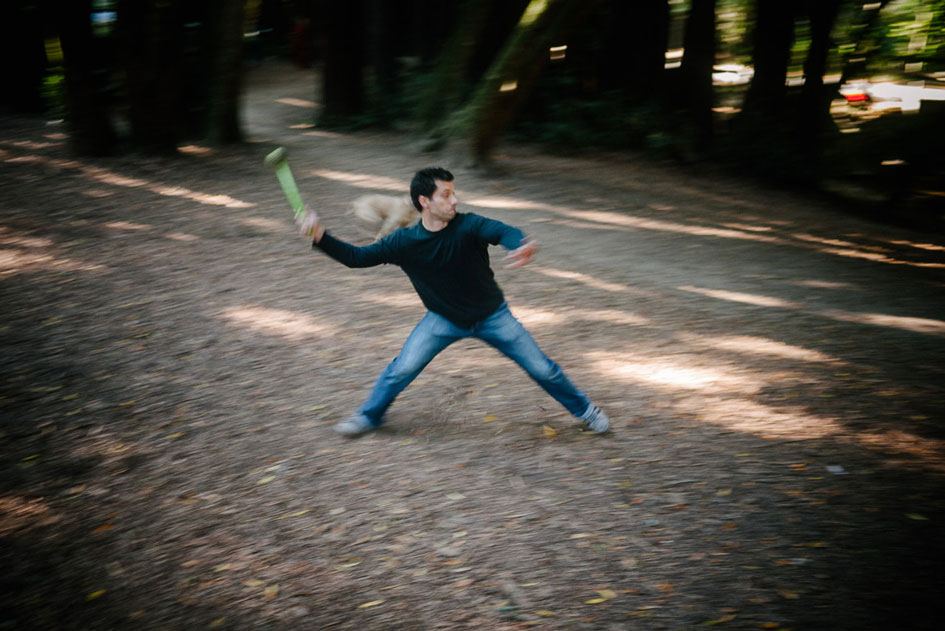 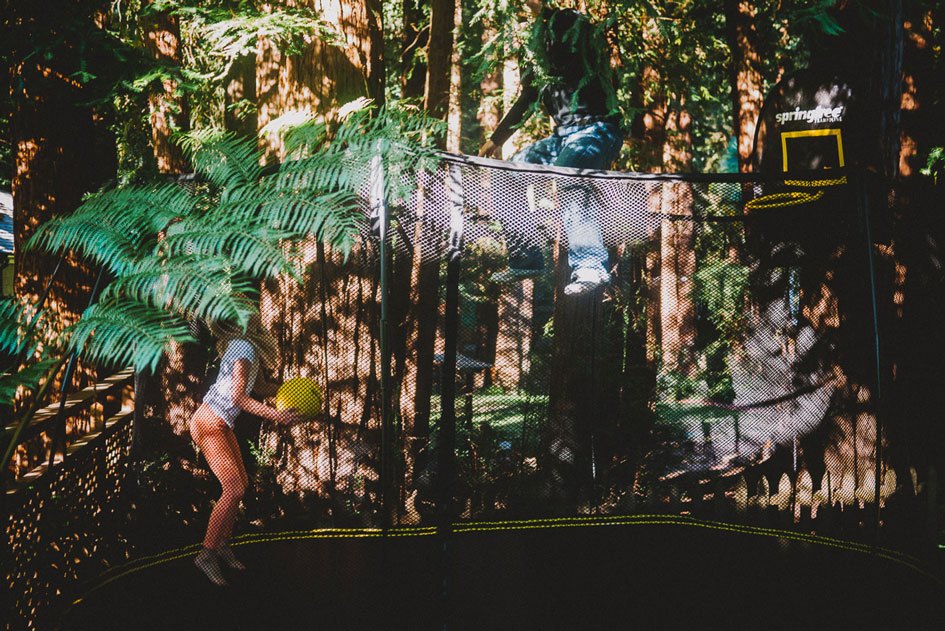 Jason bought the trampoline earlier in the year and most recently, used it for a Pinterest design team off-site party. He usually does a quick jump with his daughters before he takes them to school. 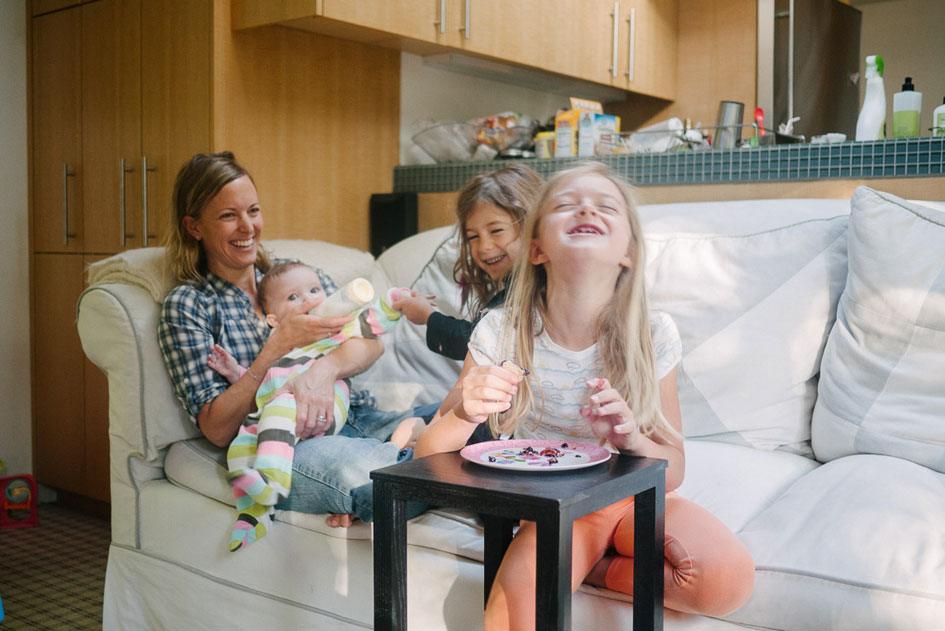 He and his wife, Sarah, get the oldest two ready to go.

What’s the biggest difference you’ve found between designing at an agency versus a startup?

“I’ve literally split my career in half — half basically advertising, and then half product. It’s been an incredibly interesting career, and I’ve been so lucky. I would argue that you can be more creative within a startup than within an agency. Within an agency, you have to serve the client. Within the startup, you have the ability to influence — you are the client. You might have clients internally, but you really have the true opportunity — especially in Pinterest — to go up to a Ben and Evan and plead your case and just pummel them with your ideas. They might be like hey, that’s a really kick-ass idea. Where at the agency are you talking to the founders of a company? Your world of possibilities is just so much.” 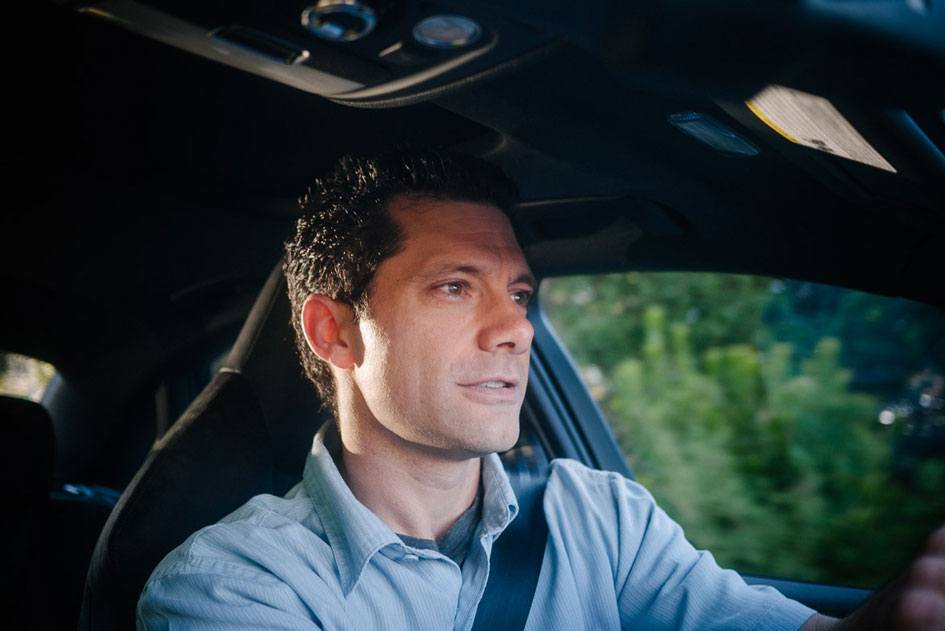 Jason drives in to work from his home in Mill Valley. 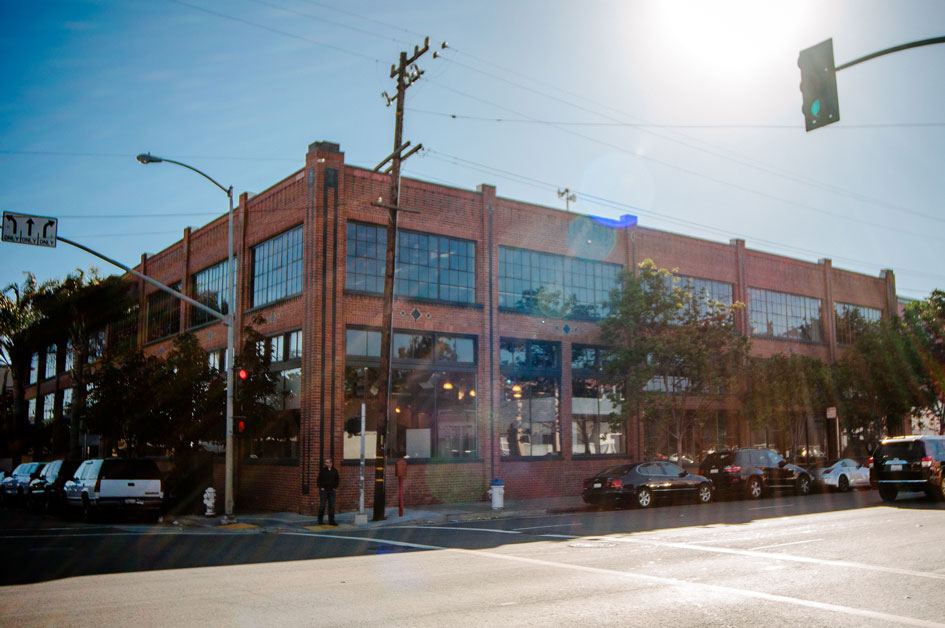 Outside the Pinterest office, where the company has just moved into a huge converted SOMA warehouse loft space. 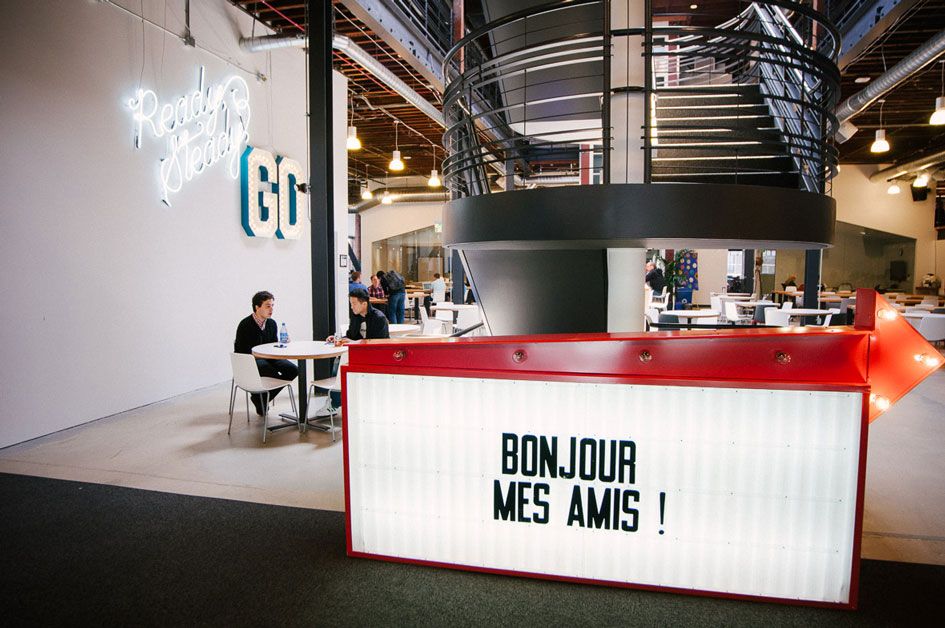 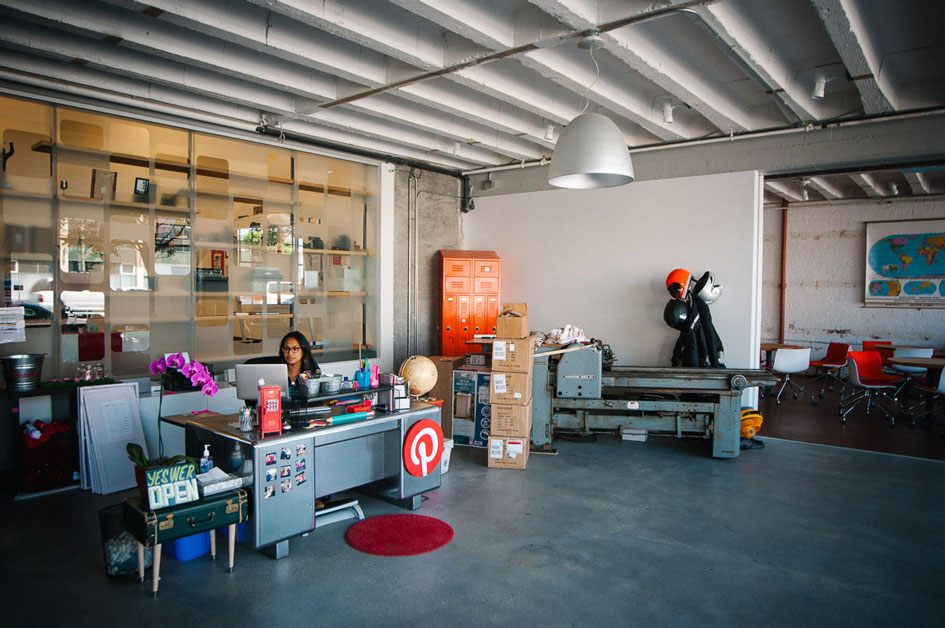 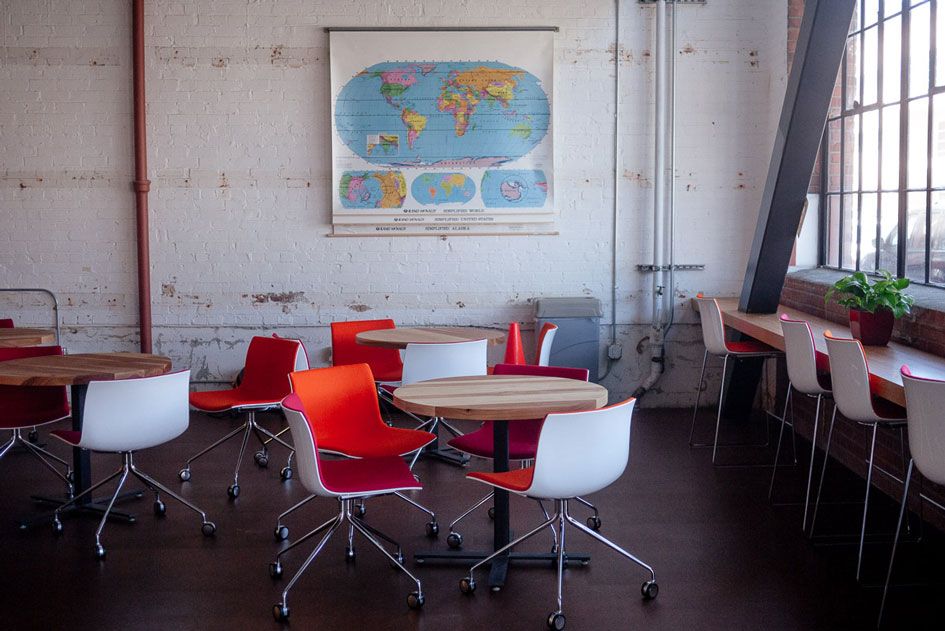 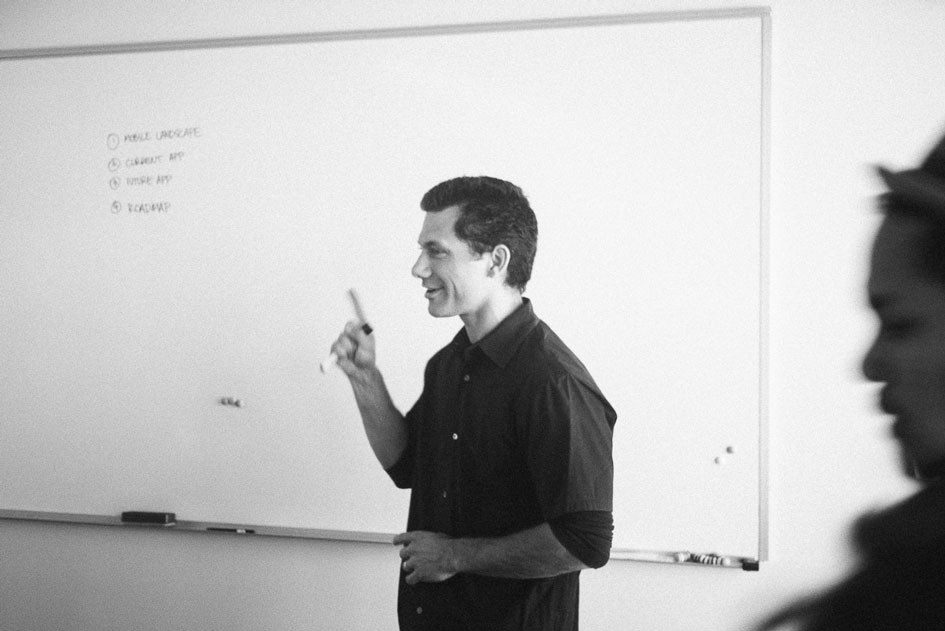 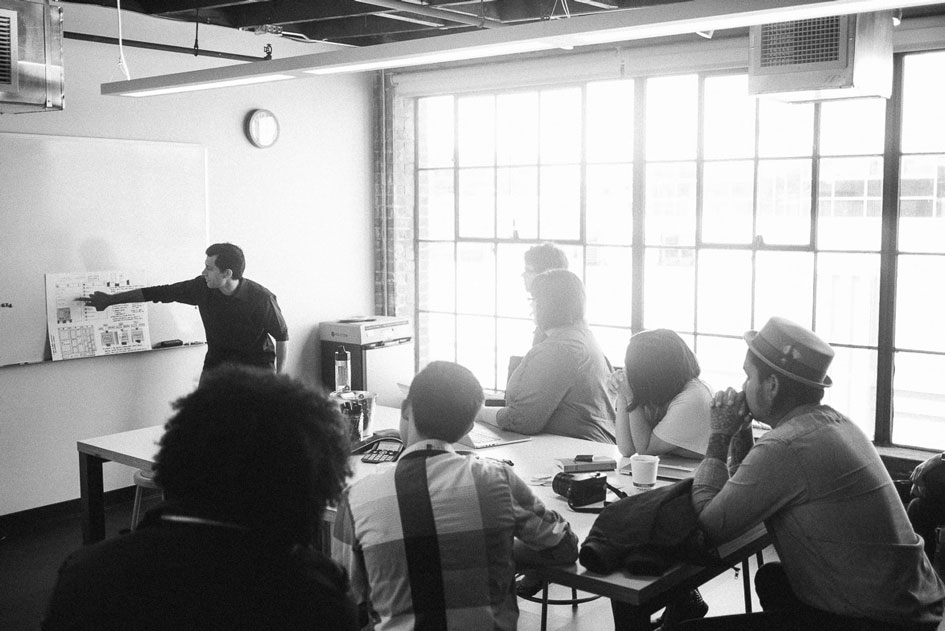 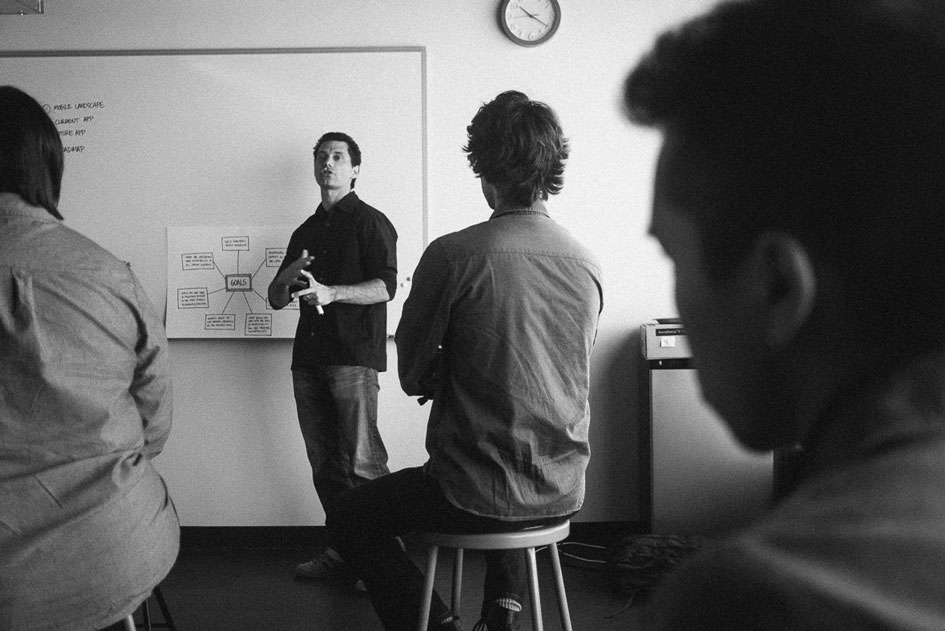 Jason presenting in a critique session about his work on Pinterest’s mobile navigation patterns.

How do you approach design team meetings?

“I try to include very different people in the brainstorming conversation, including PM’s and engineers. A lot of designers want to go in their little cave and come back and present the Ten Commandments of what you should do. I’m more like hey, man, let’s figure this out together. I don’t know everything.”

“When I was younger, basically, everyone’s on this sort of spectrum of an auditory or a visual learner. Most people are somewhere in the middle of the spectrum. I am literally off the charts to the visual side. The reality is the educational system is much more geared around auditory learning and short-term memorization. One of the coping mechanisms I had was a thing called mind maps. Basically, you have a concept and a bunch of nodes coming from that concept and how they all correlate and work together. It’s all in a visual way. That’s how I think. For me, that translates so well into product design and basically information architecture, but also, the weird thing, just like the Leica, I come from that low fidelity. I always try and divorce myself from the executional side of product development in the early stages. People jump into Photoshop way, way too fast. You need to solve all the problems in an incredibly low-fidelity way, in a conceptual way.

I just had a presentation with Ben and Evan about the future of the mobile stuff.  I gave the whole presentation completely analog. I completely did it Mad Man style, on physical boards that I flipped through. The fantastic thing was everyone paid attention. No one was on their phones, and people had to think through the concepts. We had criteria of how we were evaluating these different directions, and I had a huge matrix chart that was hand-drawn, and then I had a mind map thing that’s like the whole information architecture of the app. We countered it with the follow-up at the end of the meeting.  We gave them live prototypes of the apps. We went from absolute low fidelity to done.” 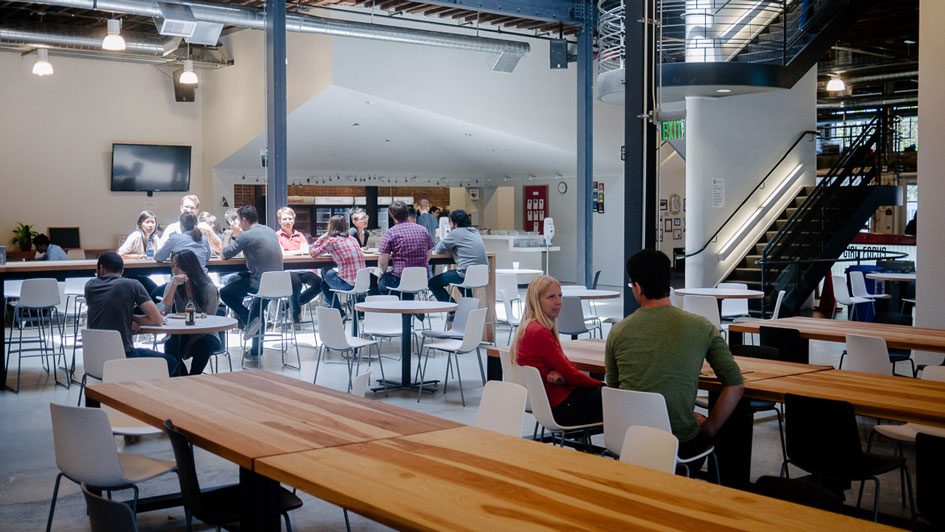 Everyone gathers together for lunch, which is catered daily by local restaurants and chefs. 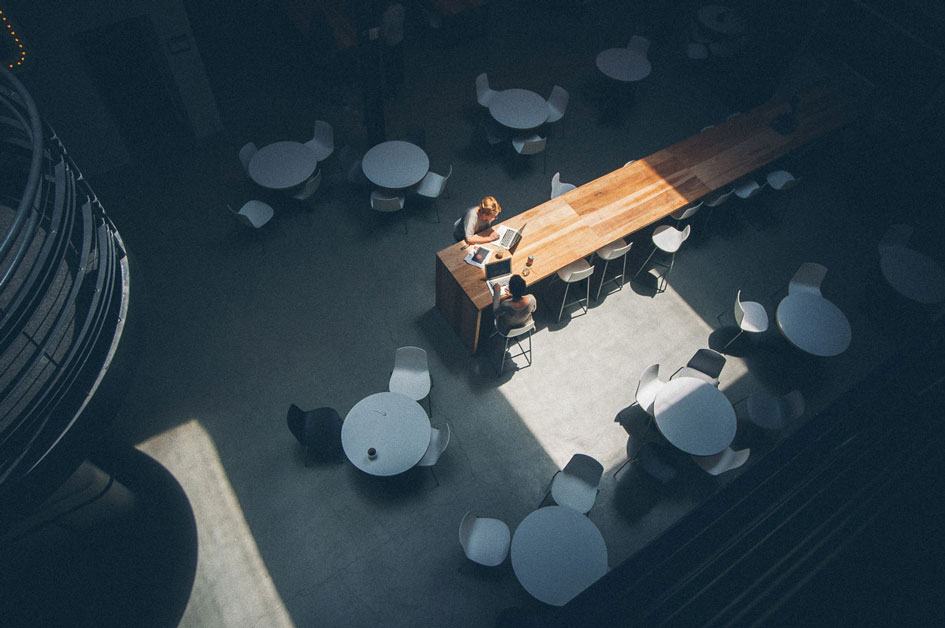 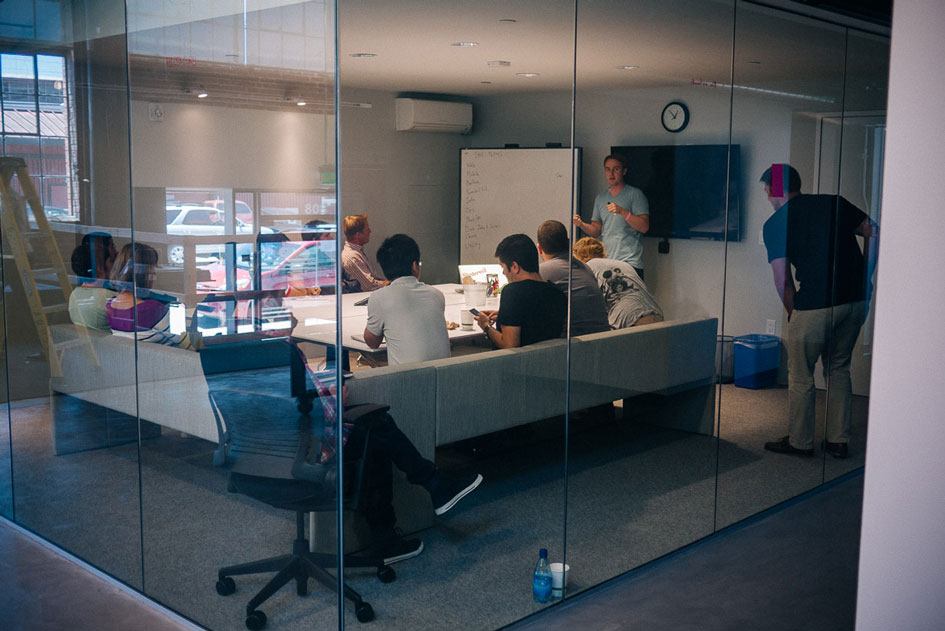 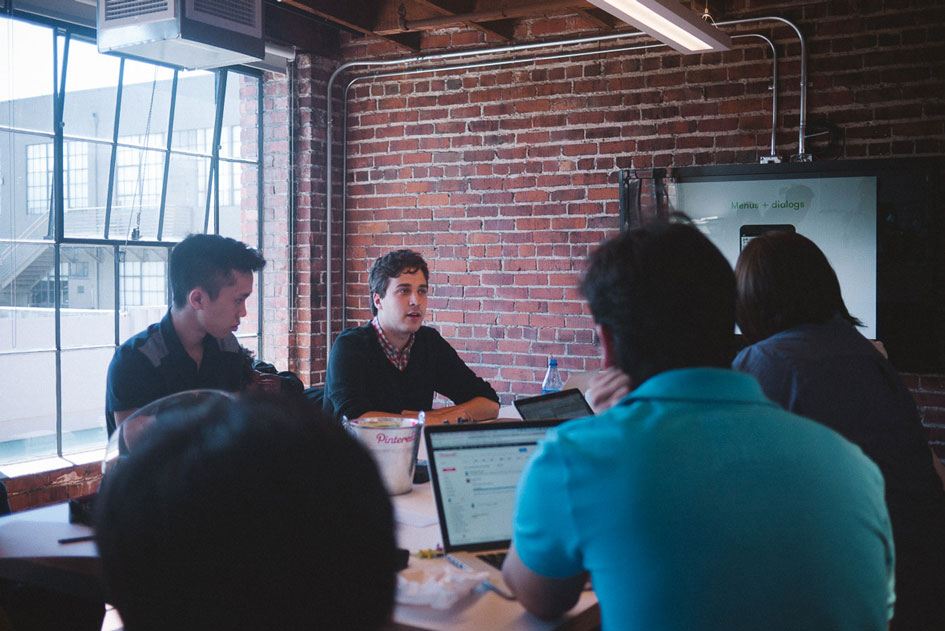 Meetings take place everywhere — from the lounge spaces to glass offices. One of the core company values is “knit”, which loosely translates to “collaboration”, so you’ll often find teams across disciplines working together.  Meeting rooms were named by employees and represent popular pins, such as Kale Chips, Hipster Babies and DIY.

“I would say a great Pinterest designer would be a person who really, genuinely thinks about how they can help out the user first. The vast majority of people here have insanely good intentions. That’s a big difference in Pinterest and other companies I’ve worked with. This isn’t an ego thing to create my own product and my own great thing. It’s a question of ‘What can I do to help build the most flexible tool for people to use?’ It’s a little bit subservient, almost like you’re a guide.  This is how I look at it, anyway.” 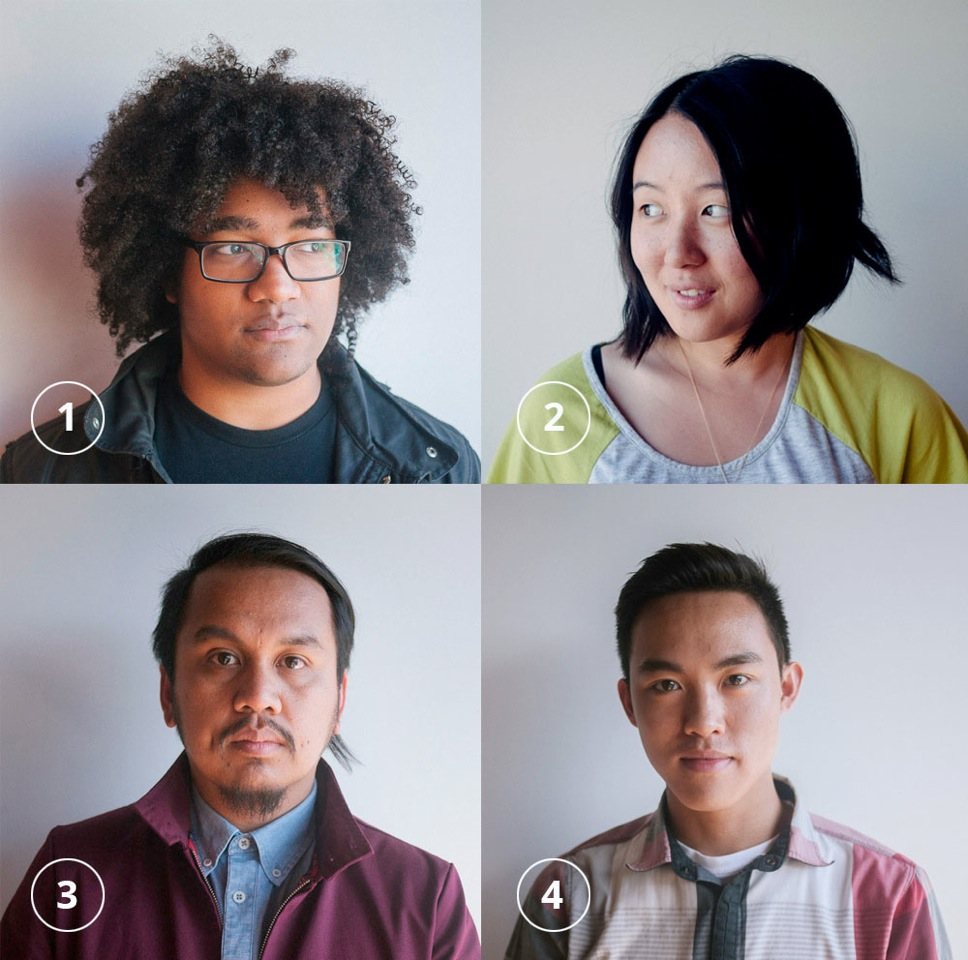 1. [Justin Edmund])(http://designerfund.com/bridge/designer/justin-edmund/) is a product designer who designs delightful experiences that help users with their everyday lives. To date, he has worked on many parts of the Pinterest product, most notably, user profiles and secret boards.

2. Ash Huang  is a designer and illustrator at Pinterest, where she endeavors to fix the Internet more often than she breaks it. This usually means drawing icons and tiny pins, pushing pixels and inhaling sharpie fumes during sketch sessions.

3. [Everett Katigbak](http://designerfund.com/bridge/designer/everett-katigbak/) is a tinkerer, storyteller, and hacker of physical objects. As Pinterest’s brand design manager, his job is to communicate our story to pinners from all walks of life.

4. [Victor Ng](http://designerfund.com/bridge/designer/victor-ng/) is a brand designer and sometimes-librarian. He helps craft the Pinterest story with pixels, photographs, print and video. 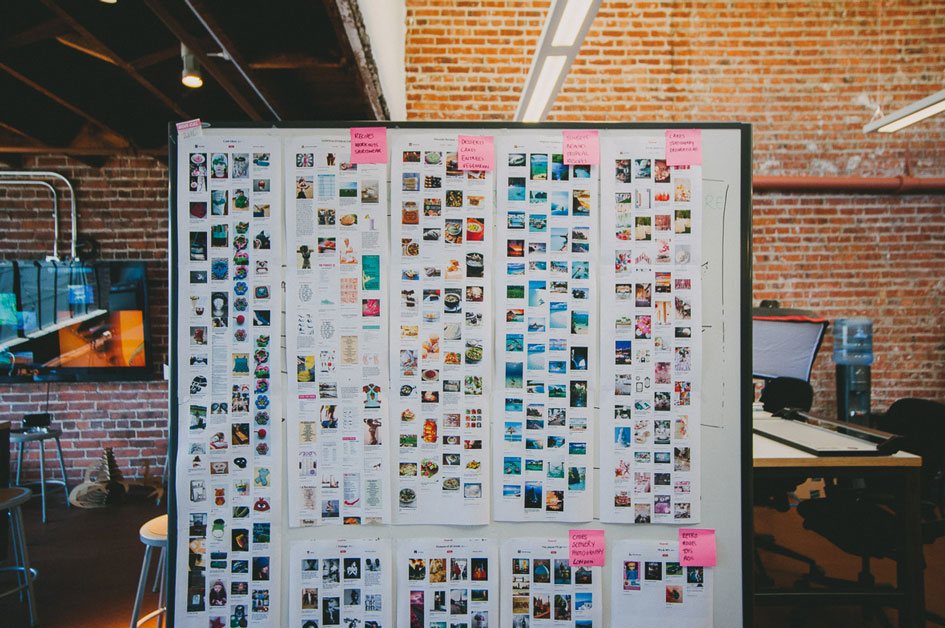 Laying out Pinterest board profiles in order to visualize different user trends. 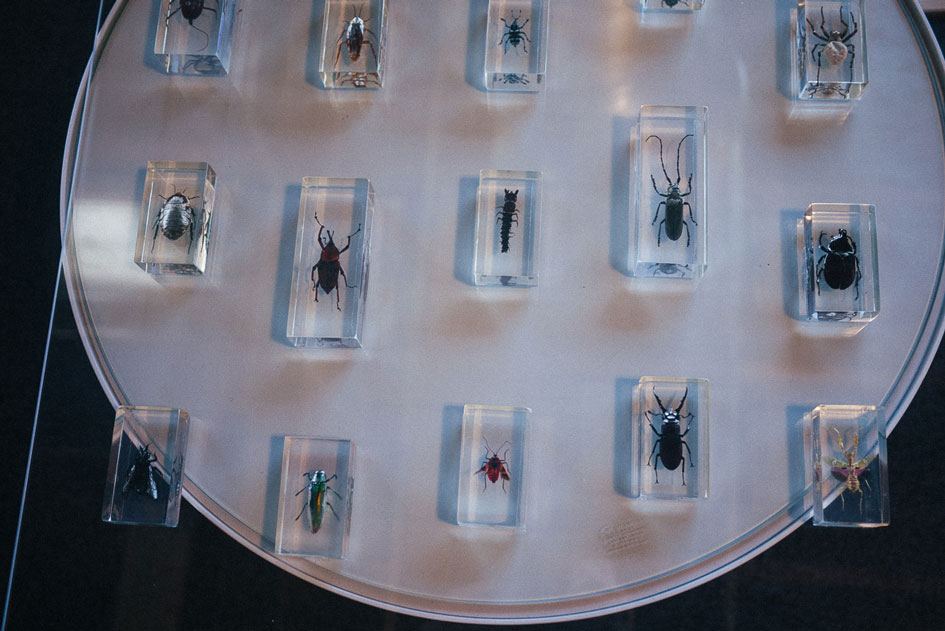 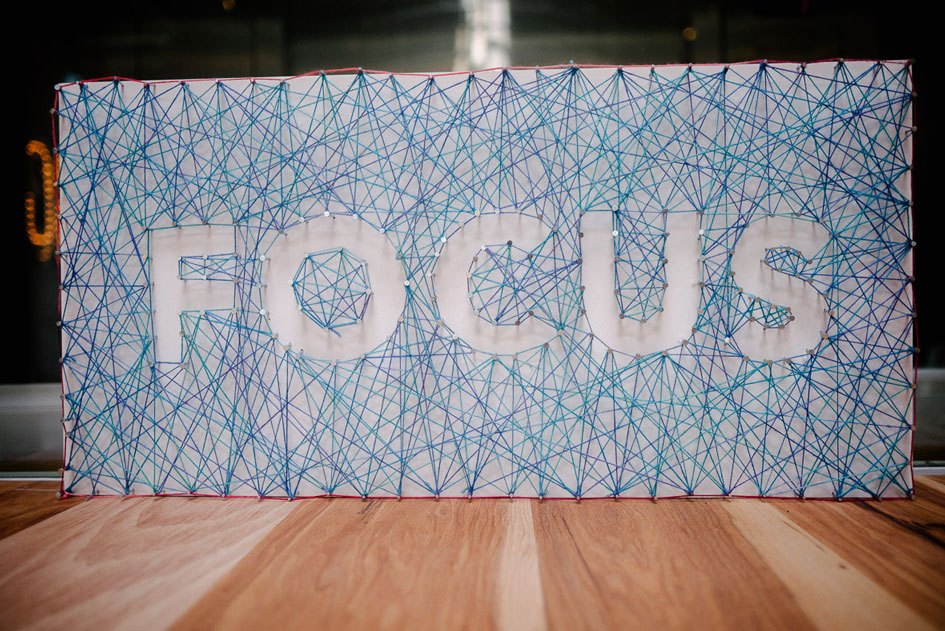 Amidst all of the amazing happenings at Pinterest, the Pinterest folk occasionally needs a reminder to FOCUS. This was made during a recent “Makeathon”, Pinterest’s version of a hackathon. 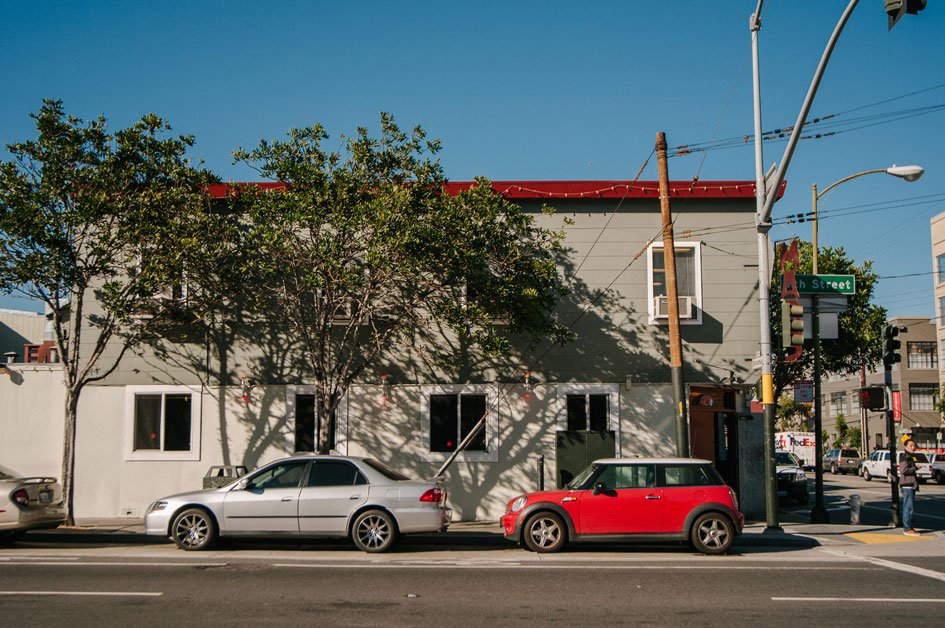 Pinterest folk head out for drinks at a local favorite bar, Mars Bar.

“I met with Evan, and Evan and I crossed over at Facebook. We finally had this dinner, and the guy was just so passionate – so incredibly passionate. It was a visceral gut reaction. I was just like man, this guy, I like him. I like him, and he’s passionate about this, and it’s based around grids and photos which are two of the things I always chase in my career. So I did it. I couldn’t be more glad. They’re such good, stand-up guys.”

What excites you about Pinterest’s future?

“I feel like pins today are so JV compared to where they’re going to be — things like location and the beginnings of rich pins. We’re at level 1 of maybe 100. It’s this ideal of Pinterest being able to help you — help inspire you and collect that inspiration, to help you do that inspiration in the real world, and then put that back. It’s the full circle, basically.”

Any advice for designers?

Design at Gusto: Keeping Collaboration and Customers at the Core