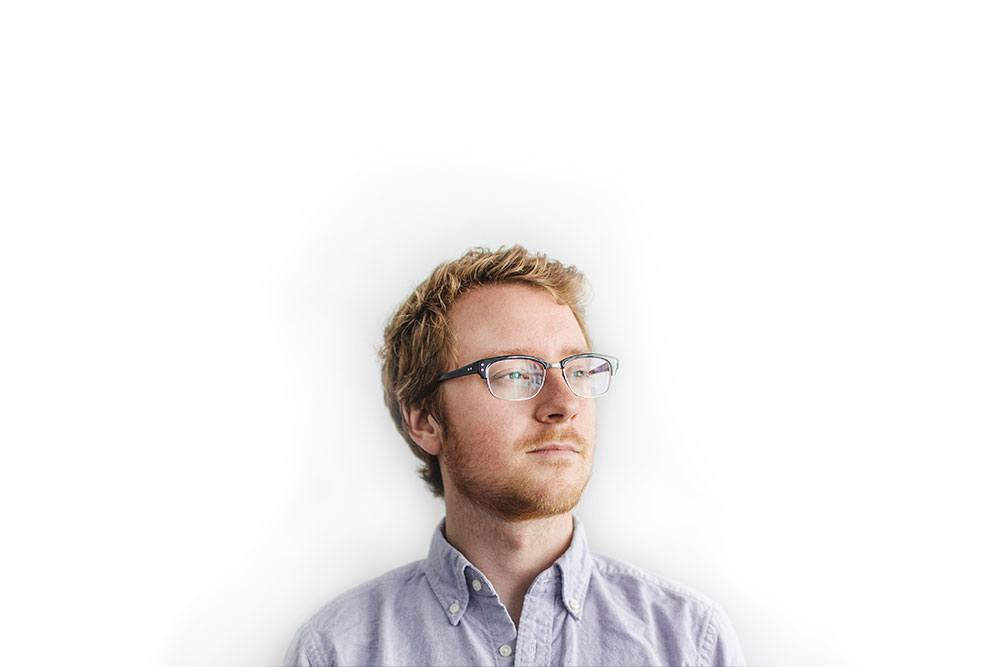 Wonder what it’s like to be a designer at tech company that truly values design? We invite you to take peek into one of our Bridge partners, Dropbox, through the eyes of Rasmus Andersson.

Rasmus spent four years as the original designer for Spotify in Sweden before moving to the US in 2011 to work for Facebook. He joined the Dropbox team in March.

Rasmus’ experience lies primarily in product architecture and macro level thinking about design, though at the end of the day he just thinks of himself as a maker.

“We were all kids once. Before we were imprinted with societal rules and the concept of being professionally “important,” we saw possibilities in the simplest of things. A stick could be a cow in a ranch, a piece of a wall in a house, the mast of a boat, or an arrow for a bow. When we see a stick today we simply think of it as a stick, and therein lies the problem with defining ourselves within a specific craft. I don’t have to fit the label of designer or an engineer — I’m a maker. To a greater or lesser degree, we are all makers.”

Join us as we walk through a day in the life of Rasmus Andersson. 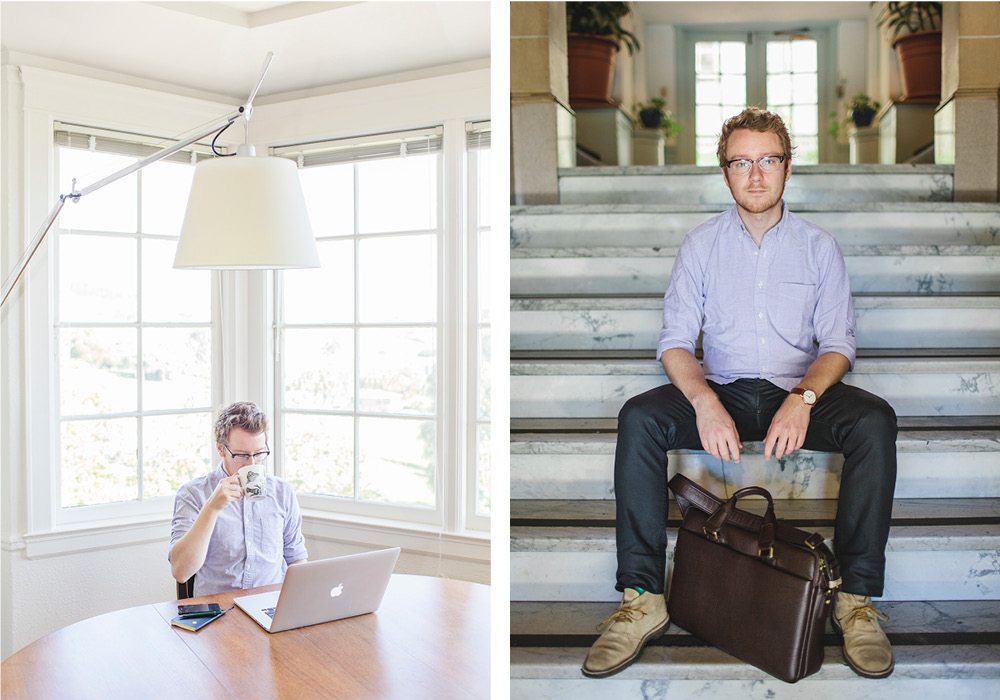 Rasmus wakes up without an alarm in his light-filled apartment in the Mission. An open shelf in his minimalist space holds almost everything he owns: his clothes, cameras, books, and loudspeakers. This reminds him of his physical possessions, makes him question whether or not he needs them, and helps him stay free from things he doesn’t need. He takes the same approach to product design. 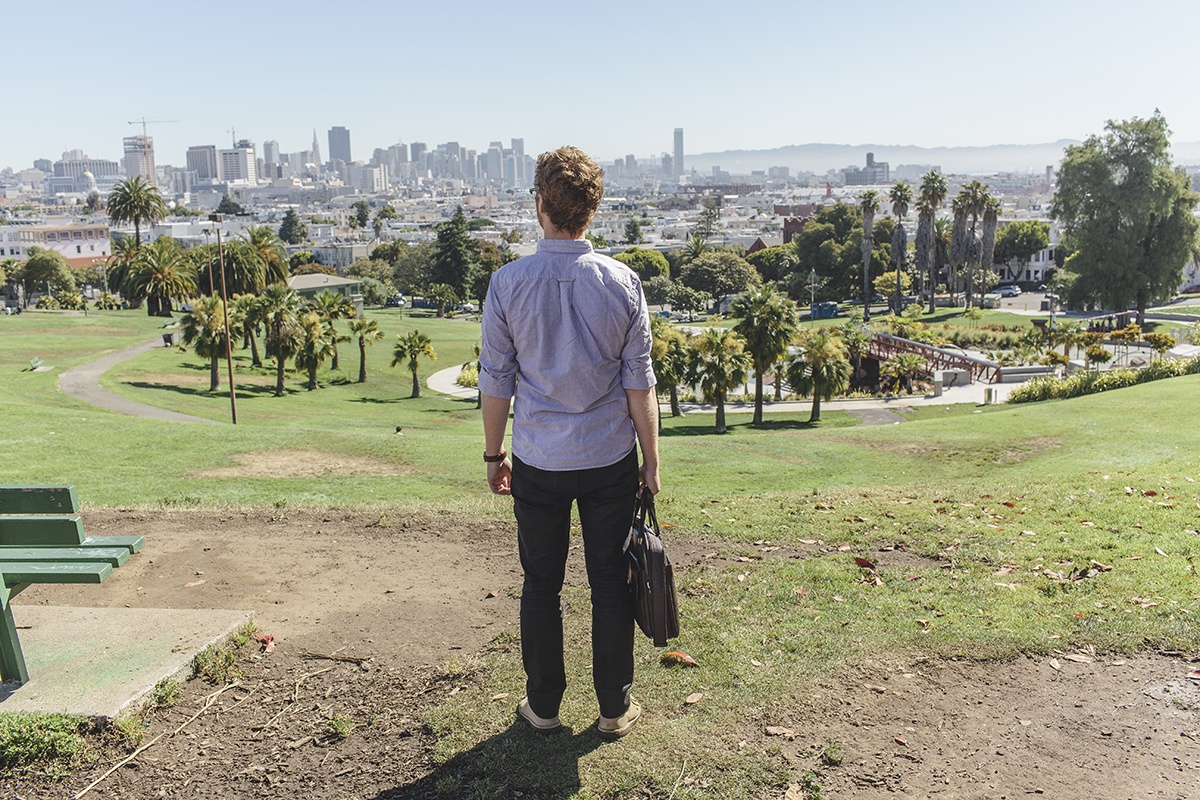 Why do you love doing what you’re doing?

“Everyday when I wake up, I’m excited to be part of making people’s lives better. It’s a long and slow game as we all know, but you have to remind yourself of the ideals, the goals you’re striving toward. The fact that I can build something, and see and use that something after I build it, is just fascinating to me — has been ever since I was a little kid building tree houses and electronics, and still is to this day.” 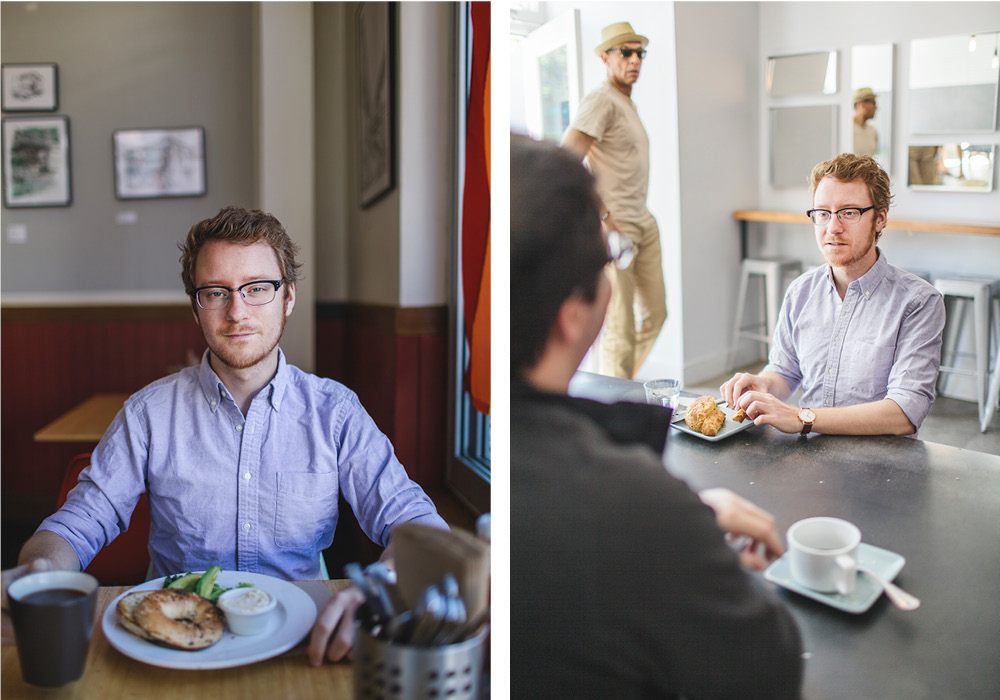 Once Rasmus leaves home, he grabs a quick breakfast and cranks out some morning work at one of his neighborhood haunts (typically Craftsman and Wolves or Dolores Park Cafe). He then takes a mid-morning shuttle from the Mission district to Dropbox HQ in downtown’s SoMA neighborhood. 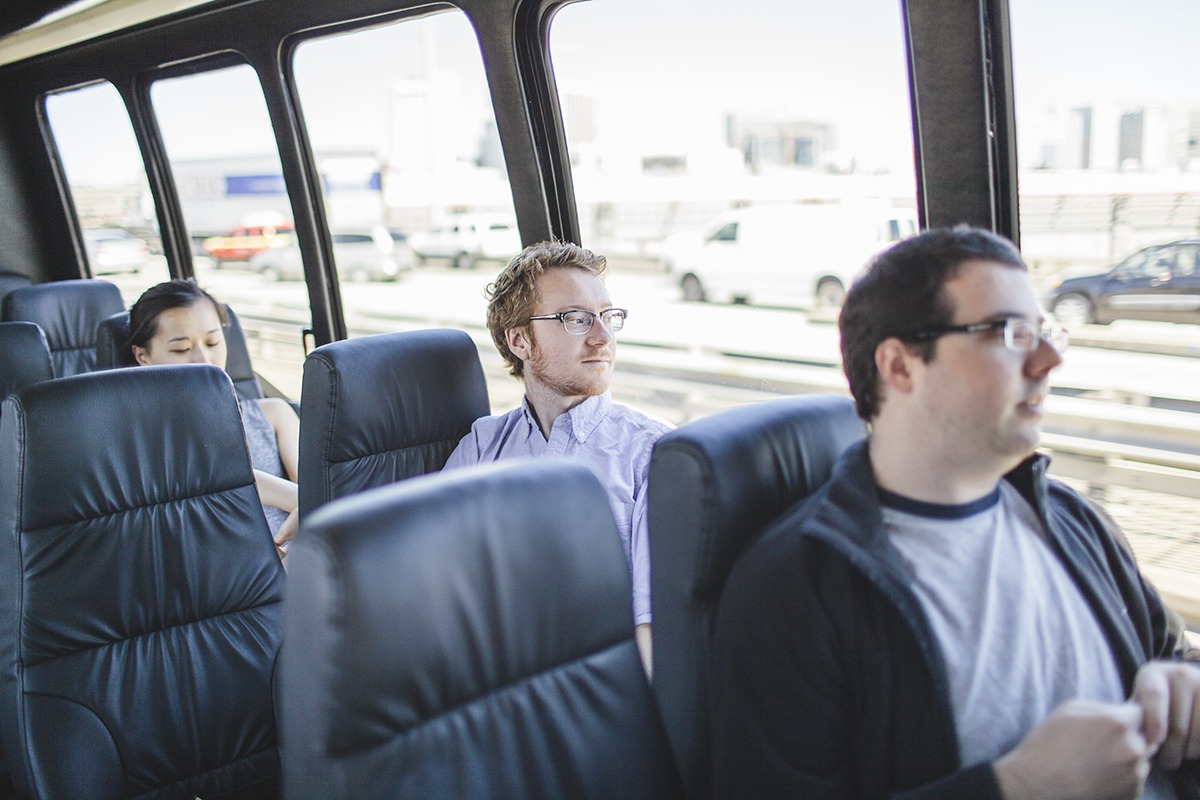 Why did you decide to work at Dropbox?

“The amazing opportunity to be part of changing the way we think about ‘stuff’ and memories.” 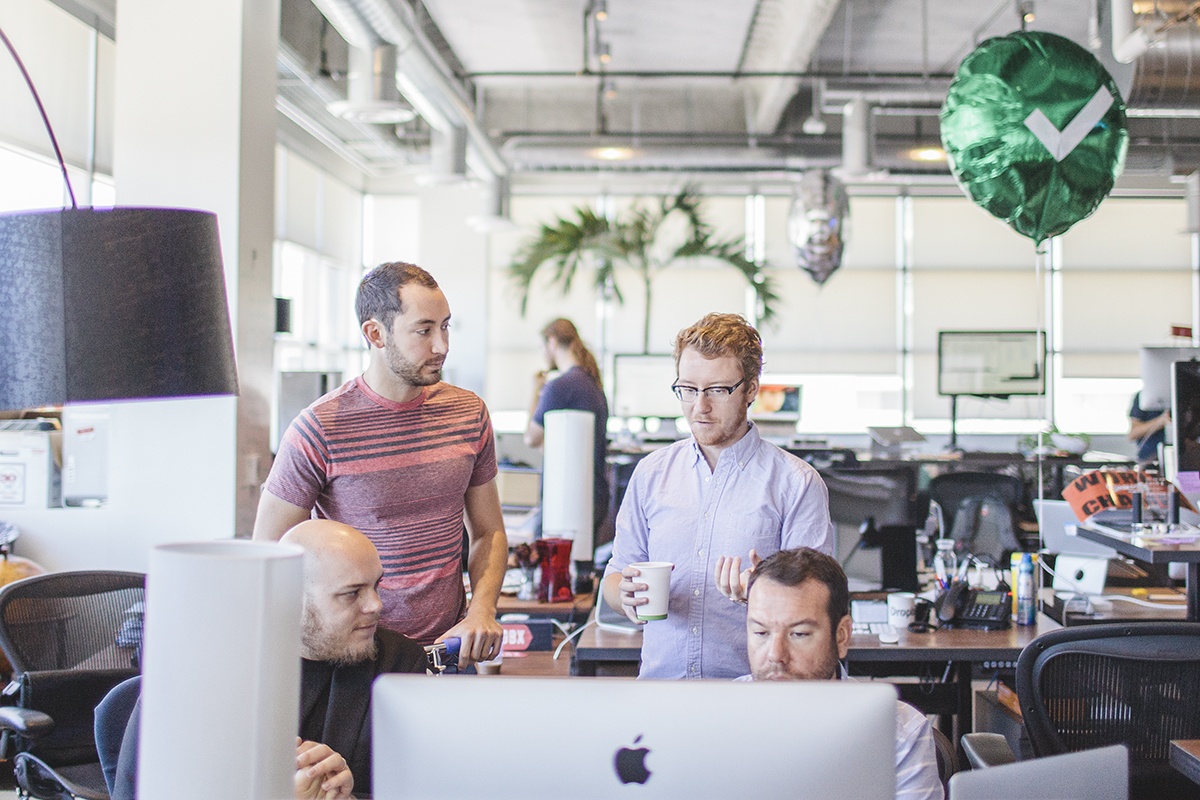 Adam Polselli and Rasmus Andersson chat with Morgan Knutson and Ryan Putnam. Each new hire receives a helium-inflated Dropbox balloon (silver for interns, green for longer-term hires) indicating that they are new to the company. 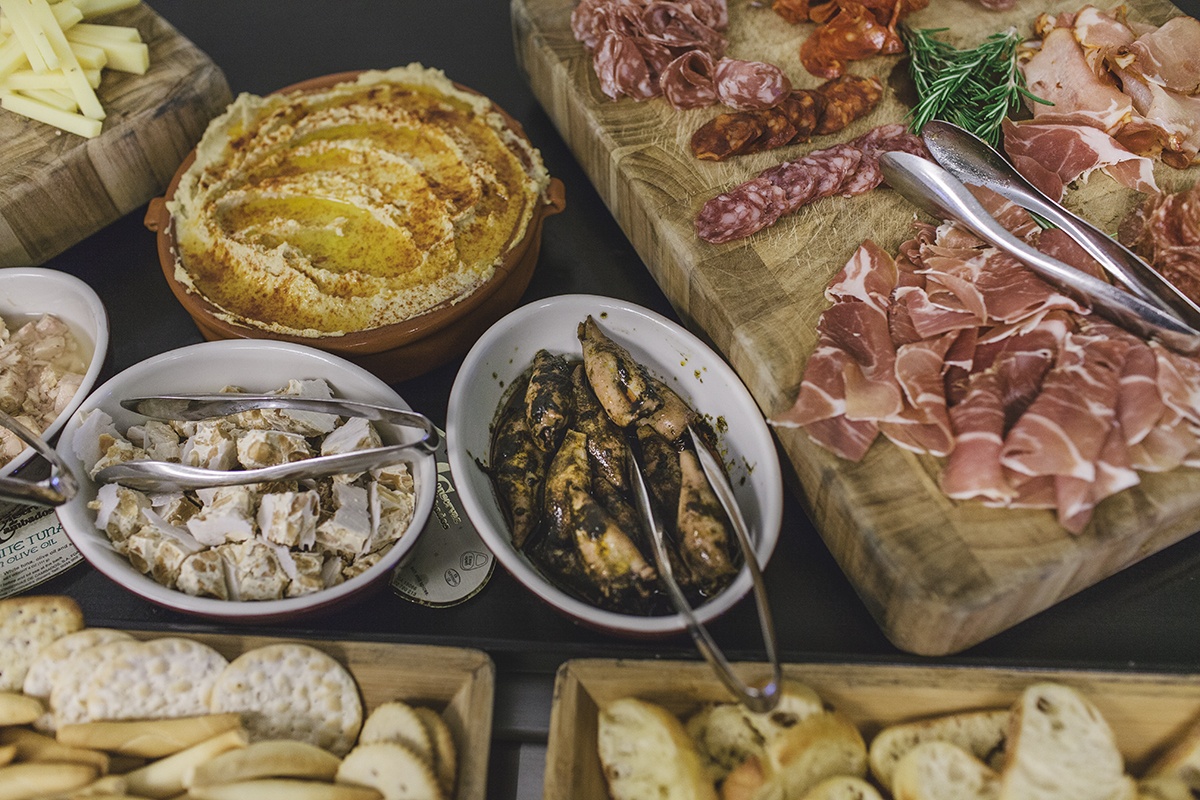 Few people choose to eat lunch outside of Dropbox HQ, largely because the food is so good in house. A full kitchen staff serves everything from charcuterie to vermicelli to fish tacos.

How are design meetings/crits structured at Dropbox?

“Everyday we have an hour blocked off during the afternoon for the design team to give each other critique and receive feedback. It’s free-form in a room around a projector and with whiteboards that let us display, discuss, and collaborate on things we are currently working on. Someone wants feedback on something? They just say ‘I need 10 minutes’ and we figure it out as we go along with the critique session.” 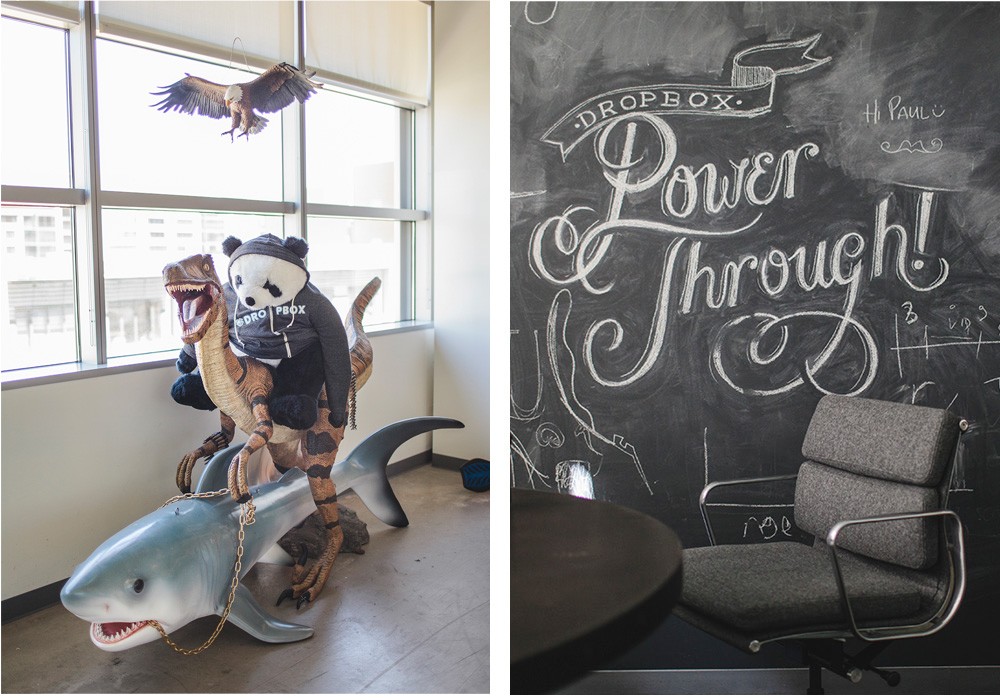 When you think of a great Dropbox designer, who is that person?

“Our founders Arash and Drew. They saw the opportunity and just went ahead and built it. That’s a trait in any person that I value very highly. You see something you don’t like? Just fix it or propose a better solution and get some people to help you fix it.”

Here’s a little bit about four members of the design team. 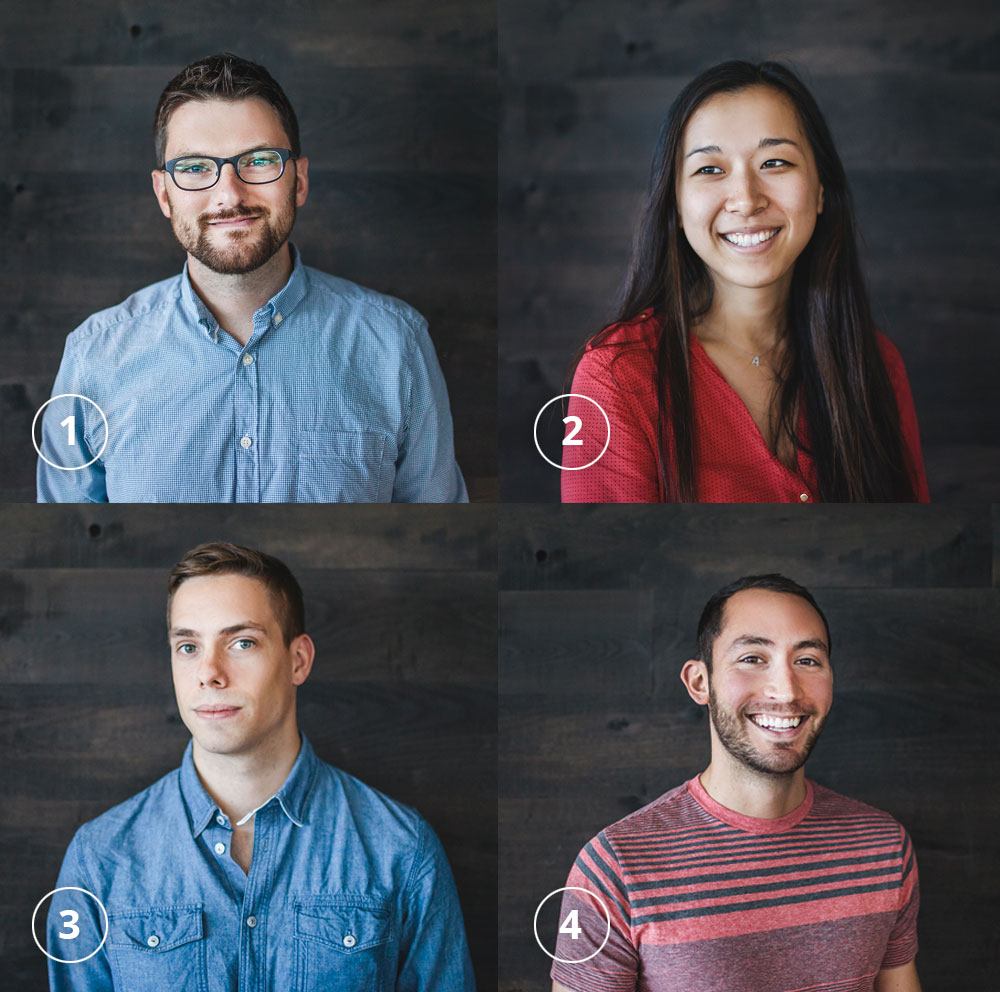 1. Adam Michela is a maker of digital products and the father of two bright-eyed little boys in San Francisco, California. He joins Dropbox from Facebook where he worked as a product designer. Prior to Facebook, Adam moved to the Bay Area from Austin, TX where he created experiences for exploring the world through the eyes of friends with Gowalla.

2. Alice Lee loves art and gets to make it everyday at Dropbox; she previously worked at Microsoft, foursquare, and Path as an intern. The one thing that she will never ever throw away is her Nikon D100, which used to belong to her father and is the first camera she ever owned. Because it is such a low-quality DSLR (with whopping 6 megapixels and poor light sensing capabilities), it forced her to learn how to shoot manually and really dig deep into the instrument, and that’s how she was introduced to the world of photography.

3. Joshua Jenkins likes design. In fact, he does it professionally. Joshua has been described as “ideal to work with” and “pretty serious.” He likes to focus on problems, not pixels. When explaining his work to his parents, he says “You know how you slide to unlock your iPhone? I do stuff like that.”

4. Adam Polselli comes to Dropbox by way of Rdio, where he spent three years designing what has become one of the world’s leading streaming music services. A University of Michigan alum, Adam likes science fiction, songs on repeat, high-tops, and Oxford commas. 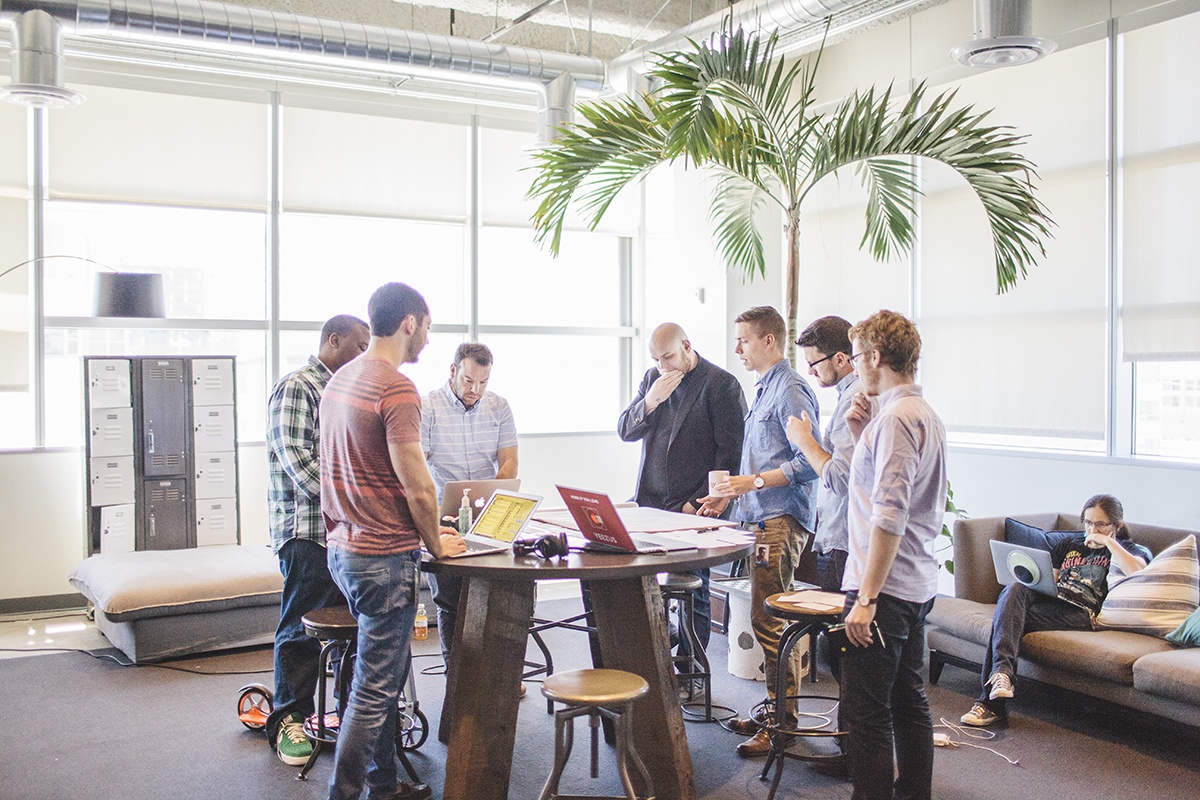 While the design team is divided among departments, every day they’ll come together for a design critique to keep each other up-to-date on projects and initiatives. Soleio Cuervo (not pictured), formerly a design lead at Facebook, directs the team. 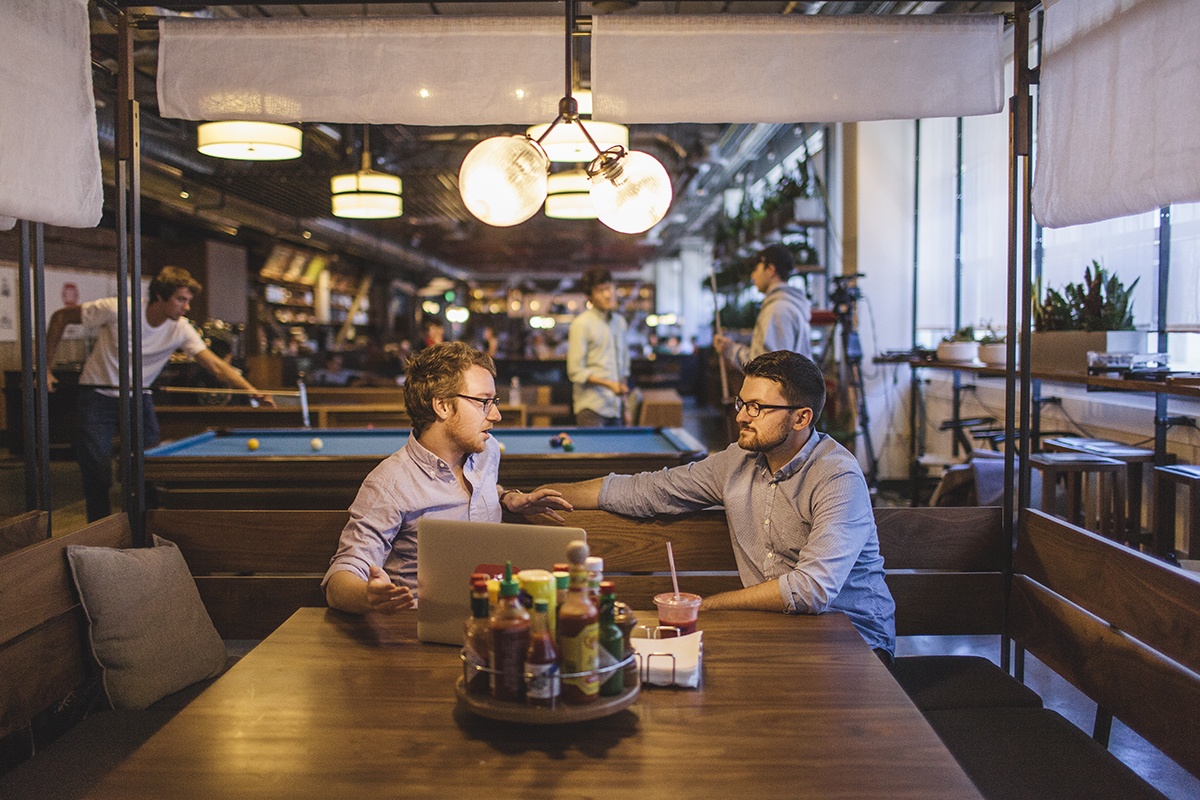 Rasmus’ favorite space is the Dropbox café. “It’s usually quiet and a good place to think and be without distractions. We also have the LEGO room — a meeting room full of classic LEGOs where you can build awesome little cars and stuff. At each end of our spacious office we have large open areas with lots of daylight. These are great places to hang out while taking notes or having discussions.”

What do you wish you knew as a designer early on?

“I wish I knew that being a designer is not really a ‘thing.’ In the late 1990s when I had my first job as a designer and knew that this was something I enjoyed doing, I had this sense that there was a designer profile. You know, that a “designer” has a certain kind of computer and likes certain kinds of typefaces. It turns out that typefaces and computers have nothing to do with design, as they are just tools and subject to trends and fashion. I thought that I needed to go to expensive graphic design schools to “become” a designer. If I only knew that I already was a designer and that I had been since I was a little kid, my life would probably look a little bit different. I should just have focused on building the things I enjoyed building.

Listen to your heart (i.e. do what you truly enjoy doing) and don’t compare yourself to other “designers” (it will always make you feel unaccomplished.) Sure, services like Dribbble are fun and inspiring, but also infectious in the way it makes you, as a young designer, believe that style X is better than style Y, or that this is how you should solve problem Z. So ingest inspiration in moderation and be aware that it’s only inspiration and not a competition. There’s no right or wrong in design, just a spectrum from useful to useless.

Last word of advice: Never let function follow (be slave to) form. Form is as important as function, but no visual design can “fix” bad function, but good function can fix poor form. Just ask yourself this question: How many successful apps have I used that don’t work but are beautiful, and how many ugly apps that works great have I used?” 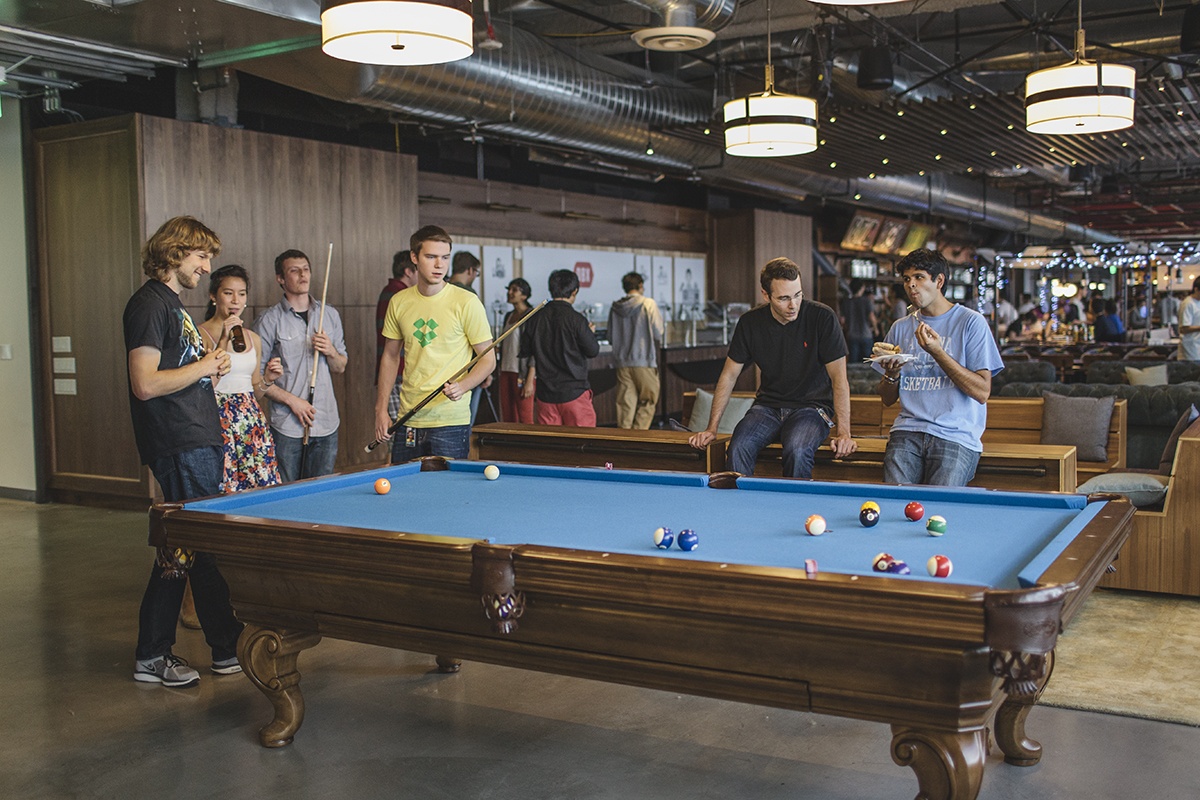 Friday evenings often are filled with events at Dropbox HQ – in this case, a space-themed event for interns.

What do you like to do in your free time?

“Software engineering is actually a major hobby of mine. I don’t have a TV at home, which many people use to “zoom out” and clear their heads. Instead, I enjoy writing some obscure little piece of software (like a programming language no one will ever use). It clears my head similarly to a good jogging run. Programming simple logic stuff like sequential parsers is simple enough that my brain can take a nap.

On and off I spend a lot of time on photography. I also enjoy driving my car and exploring the surrounding landscapes like Stinson Beach.”

What would you do if you weren’t a designer?

“Something where I use my hands and mind at the same time. Perhaps a documentary photographer.” 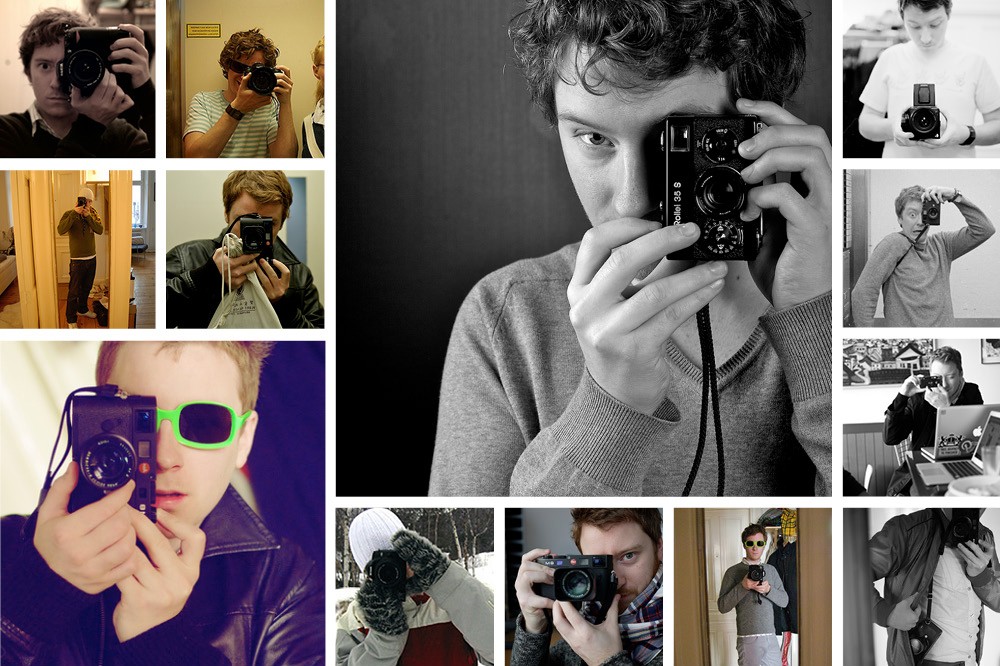 These images from Rasmus’ Flickr account show off one of his favorite hobbies over the years, photography, and his commitment to the storage of memories.

What excites you about Dropbox’s future?

“Our memories are very precious and our immaterial possessions are often fantastic anchors into — and in some cases even representations of — memories from life. As we help keep and protect these possessions we will be able to help you retain all those beautiful, and not-so beautiful memories.”

Day in the Life at Dropbox: Rasmus Andersson
Interviewing with Startups: Tips for Designers
Next