Design leaders are increasingly influential in today’s technology companies. More designers than ever hold executive positions and co-founder titles, and have the ability to build products that make a positive impact on society.

This is why it’s so important to come together, share stories from the field, and build community and resources at the intersection of design, leadership, and technology. This February, Designer Fund hosted Source, a summit for nearly 200 guests to explore what it takes to be a better design leader. The event, set at Montalvo Arts Center in Saratoga, California, featured talks and workshops from more than twenty design executives and entrepreneurs.

Here are a few top insights from the day’s discussions. We’ll explore them in detail on our blog in the coming weeks — join our community newsletter to stay in the loop.

Margaret Stewart, VP of Product Design at Facebook, shared a story about her “inner maker gone mad.” She spent so many consecutive hours knitting baby sweaters one week and during a 22-hour plane flight that she gave herself tendonitis. “It was worth every stitch,” she said. Danger aside, Margaret implored design leaders to prioritize time for hands-on creative activities unrelated to work. We do creative work for a living, but a designer’s job is often to find constraints and stay within them. Do we take the opportunity to go deep and practice creativity in unrestricted ways, like when we played as kids?

It is so good for the creative soul to be relieved of constraints or to trade them in for new ones.

Knitting, LEGO engineering, painting, and gardening are all welcome, unrestricted counterparts to our usual jobs. Yet design leaders tend to put hands-on creative activities on the backburner once they begin managing creative people. Perhaps they think creativity is someone else’s job now, Margaret suggests, and with a to-do list of important tasks it can feel selfish and silly to take time to paint.

But it’s a big mistake to neglect the maker within. Hands-on creative activities give our minds the space for “eureka moments,” by bringing us into meditative zones where we can ruminate and crack tough challenges away from the computer. They also relieve stress, remind us of our ability to learn new skills, and give us the opportunity to be a novice, which can be welcome respite from the pressure of being the best in our field.

Leaders should prioritize their own maker time, model this behavior for their team, and build safe spaces for employees to have creative experiences as well. Some companies invest heavily in this area. Facebook’s Analog Research Lab gives employees the tools to practice woodwork, print posters, and make buttons. Pinterest’s design team has a studio where employees from around the company can host workshops for one another, from lettering to terrarium crafting to whisky tasting, and even an engineer’s beekeeping class.

These companies are fortunate to have such resources, but you don’t need a corporate studio or big budget to bring creativity to your life and your team. Margaret shared three tips:

Look within to develop your leadership style

“I often look inward as part of my creative process,” said Designer Fund co-director Enrique Allen, who spoke about the power of self-awareness to cultivate balanced design leaders.

We all have the capacity for multiple leadership styles, he said, but we tend to favor certain approaches. For example, do you prefer structure, analytical rigor, proactivity, and boundaries? Or do you favor intuition, flow, letting be, and expansiveness? These ways of leading each have their strengths, but they also create blind spots in the way we evaluate opportunities or encourage and recognize creativity in our teammates.

If we evaluate our own tendencies and biases (such as a common bias against creativity), we’ll be empowered to experiment with new leaderships styles, access previously neglected skills, and welcome new types of creativity outside of our comfort zone.

If you embrace diversity within yourself, you’re more likely to value diversity externally.

To find an internal balance, Enrique suggested building self-awareness with mindfulness and meditation, as well as self-diagnostic frameworks and leadership/personality type assessments. Then experiment with attitudes and choices outside of your current active range of leadership behaviors. For example, if you tend toward structure, open parts of your work or social calendar to serendipity. If you favor logic, try to identify and describe your own emotions; if you favor emotions, try looking at situations from another angle with objective data. And if you’re action-oriented and fill up every minute with media, take “media breaks” like quiet commutes and walks, so your mind can rest and incubate ideas.

Audrey Liu gave a real-life account of how she experimented with her default attitudes and leadership habits to build strong relationships with her team. She became Head of of Product Design at Thumbtack just six weeks after joining the company, and she needed to triple her current 5-person headcount by the end of the following year.

How did she do it? Audrey found strategies to engage her colleagues and win trust quickly. For example, she fought the urge to jump into action and fix things immediately, and instead started her new role by listening. She scheduled one-on-one conversations with each team member to ask what they were excited about and what could be better, then compiled and presented the top themes back to the group. Audrey also described a moment when she admitted her mistakes. As the team grew, it became unwieldy, and she decided to hire another manager. She mentioned this decision quickly during a meeting, which took her designers by surprise. They wished Audrey had consulted them to consider the impact of a new management layer from the employee perspective. She immediately embraced humility, acknowledged her team’s concerns, and scheduled a meeting to share her thinking and rally the team around the positive impact for everyone involved.

Today, Audrey’s team at Thumbtack has grown from five to eighteen, from single discipline to multi-discipline, and from flat to stacked.

Design leadership coach Mia Blume presented the idea that a leader does not have complete top-down control of designing their team’s culture. Cultures are observable patterns of behaviors and interactions that emerge organically from elements in a system. Thus, leaders can reframe and focus on designing a system of elements that will create behaviors that become culture, rather than creating the culture itself.

She compared cultural systems to a flock of starlings flying in a coordinated, dynamic group with stunning patterns. Each bird pays attention to seven of its neighbors, and the individual parts combine to make a whole with emergent properties. In other words, building culture is a grassroots effort, and employees at all levels of an organization should have the power to influence their system.

The elements of the system or organization—like the physical environment, organizational structure, incentives, process, tools, roles and relationships—are the things leaders can shape to impact the outcome of team culture. Mia encouraged design leaders to nurture culture through experiments, tweaking one element of the larger system and observing its effects. For example, instill team rituals with dedicated spaces and time for design reviews, critiques, studio hours, and coffee breaks. Alternatively, identify the people who are social influencers in an organization and give them the incentive or budget to design their own experiences and rituals for the team.

A design leader rallies a company around ideas for a product or project. But with lots of input from diverse and brilliant team members, it can be difficult to cut through the volume and variety of voices when deciding which ideas to pursue. Without a process to filter the best ideas, we risk choosing those of the person who argues the loudest or devolving into design-by-committee.

Barb Spanton, Design Lead at Shopify, presented a framework to determine what kind of attention, and how much, to devote to each idea someone proposes.

This framework uses two scales. The first one measures emotion and asks how much team members care about an idea. The second scale measures knowledge, considering any research or data to validate the idea. 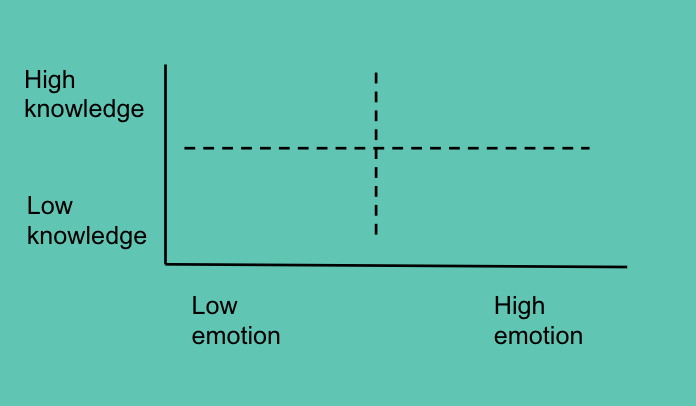 When these scales sit on two axes, ideas can fall into the four quadrants of the idea landscape based on how well informed they are and how excited people are to implement them. The four quadrants are:

The good news is that we as designers have an arsenal of tools to move these ideas back into the top right quadrant.

If you want to move an idea higher on the knowledge scale, figure out where you’re relying on assumptions and do the right research activities to fill those gaps. If you want to emotionally engage the team, find user stories that highlight why it’s worthwhile. Sketches, storyboards, prototypes, and scenarios are all storytelling tools that can increase emotional buy-in.

Set a moral vision to guide your work

Pinterest cofounder Evan Sharp called on design leaders to paint a clearer vision of the society they’re building, and to take an ethical stance on how the change they are creating leads to real social progress. “If we are going to connect the world, and be plumbers who lay pipes, we need to make sure they’re carrying fresh water.” It’s our responsibility to create a strategy that faces trends our tech industry is driving, such as climate change, automation, and globalization.

We need to design a moral vision that defends human dignity in an environment of change.

Now more than ever, designers are asking themselves: Are the products we’re building actually improving society? What is our role in spreading values that are fundamental to the world we want to create? It’s time to take a strong stance for the values behind the disruption we envision.

Each guest brought a book to exchange—sharing notes on a bookmark as to how that selection had influenced their leadership growth—and chose another designer’s book to take home. See some of the books shared.

Thank you to Montalvo Arts Center for creating an inspiring space for our summit. Montalvo is set on a historic 175-acre estate in the foothills of the Santa Cruz Mountains, and hosts performances, exhibitions, and arts education programs. The artists in residence welcomed Source guests to explore their purpose-built studios, designed to support individual and collaborative creative practice and the exchange of ideas across diverse artistic fields.

Special thanks to our Source 2017 collaborators Foundation Capital, Google, Shopify, Thumbtack, Dropbox, Facebook, LinkedIn, and Pinterest for their generous support in making this event possible for our design community.