Every company wants a healthy design culture. The challenge is getting there. When faced with the need for cultural change, leadership often fails to be effective because they miss the real challenge: you can’t design a culture directly.

Here’s what usually happens during a well-intentioned team revamp: A group of leaders gets into a room, creates a list of company values, and unveils them with posters on the wall. Then they wait. Or a company hires an executive from Apple because they want a culture like Apple’s, and then hope the new hire will make it so.

But the culture rarely catches up to Apple or to the posters. Why? Because the leaders are only setting a vision for their culture.

Vision setting is important, but it’s also the easy part. The hard part is changing the underlying organizational system so that desired behaviors emerge on their own.

In this article we’ll take a closer look how you can influence your culture in a lasting, sustainable way, including 7 tips I’ve found to be most effective for leaders growing a small startup team or improving an existing culture.

Where do cultures really come from?

Culture is an observable set of behaviors that rise organically from interactions in a system. That system, is your organization.

And while leaders cannot control the outcome (or culture), they do have the power to shape the system and the elements that constitute it. These include the physical environment, organizational structure (or lack of one), incentives, processes, tools, roles and relationships.

When you focus on the parts of the system that you can actually design, you create the opportunity for a good culture to emerge.

An analogous example of emergent behavior comes from nature—a flock of starlings, or a murmuration. Despite the much-studied beauty of this phenomenon, biologists still struggle to understand exactly how this behavior emerges. It’s straightforward at the individual level: when a starling turns, its neighbor does too, and so on. The collective behavior of a murmuration is believed to emerge from these simple, local interactions.

As engineer George F. Young and colleagues explained in a study, “Flocks of starlings exhibit a remarkable ability to maintain cohesion as a group in highly uncertain environments and with limited, noisy information.” 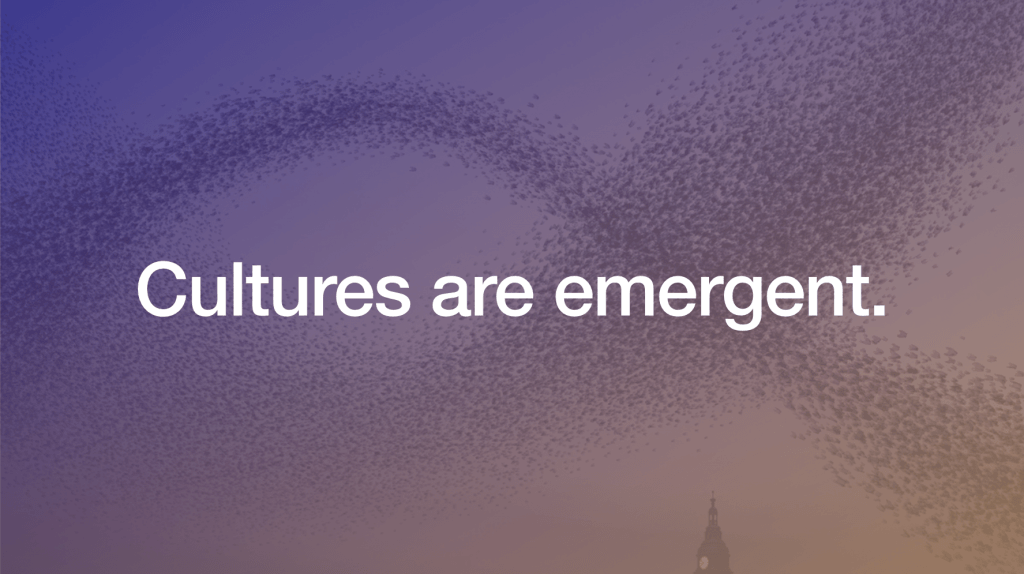 Trying to design an organization can be frustrating because it’s impossible to predict how all the little elements in a system will work together. Individually, they’re relatively understood. Combined, well, they make things complex. And even if you achieve the perfect culture, it rarely stays that way: an unexpected new element can shift behavior, and you may not even understand that it happened at all.

And while a tight grip on culture doesn’t work, neither does an entirely hands-off approach. In the absence of organizational design, a culture will form anyway. People will engage. Patterns will emerge.

The best perspective on developing culture is one that acknowledges that you cannot construct one from a plan, or predict when or how your system’s dynamics will change. Instead, focus on individual components and then adapt to what results. What you cannot design a priori, you can still attend to, iterate on, and nurture. By observation, experimentation, and iteration you can nudge your culture in the right direction over time. 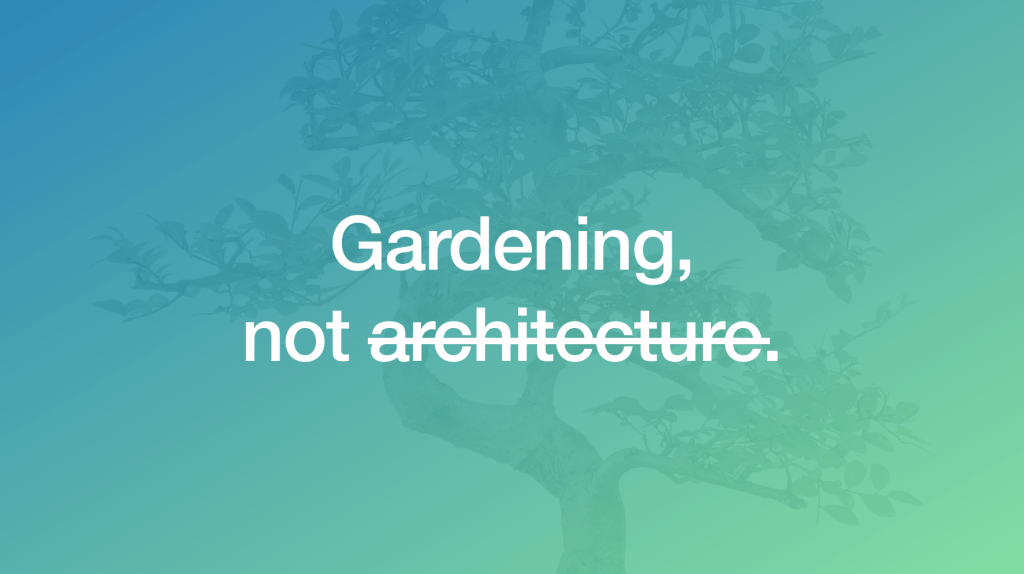 Inspired by an Oblique Strategies card, the “Gardening, not architecture” mindset recognizes that a culture cannot be controlled and that a certain level of nurturing and pruning is a far more healthy and realistic approach to cultivating a good system.

Here are 7 tips to stay in the gardening mindset. This list is by no means exhaustive, but they’re tools I’ve seen to be effective time and again.

Once someone proclaims you have a “culture problem,” you’ve probably got a multifaceted challenge ahead of you. If you proactively nurture before issues arise, and shape the way your organization behaves as a group, you have a much better chance of nudging things in the right direction. 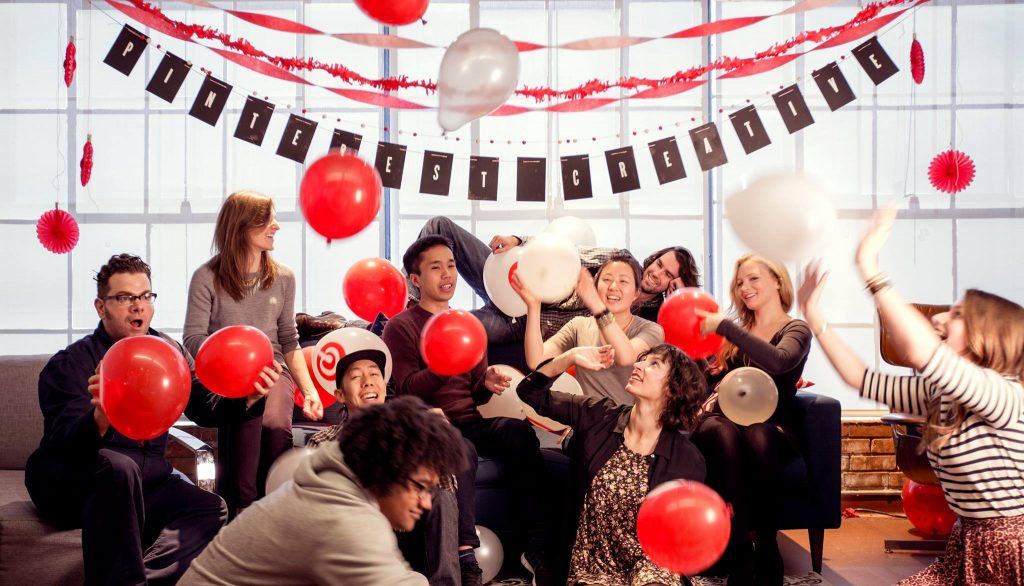 A few years ago at Pinterest, we were about to move into our neighboring office, which had been completely gutted and designed exactly for our needs. One of many awesome things about the building was a dedicated creative studio on the second floor, with lots of room for making and critiquing our work.

However, once we moved in, there were rumblings from other teams about the space, and I noticed people were timid about coming over to our area. Sometimes designers would get flak about having their own dedicated “office.” No other teams had their own rooms, and we actually had two. It certainly wasn’t our intent to be designers in a corner — we were just excited about having a space that was dedicated to making.

This was a signal that we needed to do a little course correction before it was too late. I didn’t want it to become a problem.

I thought about ways to make the Studio into a space that the entire company felt ownership over, and to position it as not just for design but for making and “knitting” (our way of talking about collaboration.

So I started a small project called Studio Nights. Once a week or so, I’d find an employee to teach one of their hobbies or skills to a group of their colleagues. We had an engineer teach us about beekeeping, a designer teach lettering, and a PM share wine pairings. All kinds of unexpected skills emerged.

It started out small, but it took on a life of its own. Eventually, classes were not only taught by internal creators, but external. Classes were opened up to the community. And later it evolved into much larger events, including a two-day extravaganza called Knit Con for employees to stop all activity and focus on teaching and learning from each other.

Studio Nights was a deliberate response to early red flags about an isolated design department. The result was more than just an inclusive environment for makers across the company; talent and interest started bubbling up everywhere, with vibrant creativity outside of the teams that were expected to be the “creative ones.”

The changes you make to prevent problems don’t always need to be major overhauls of existing frameworks. Small shifts like Studio Nights can create huge impact over time.

While you’re pruning and changing elements of your system, you might identify existing behaviors that already align with your desired culture.

Simply provide positive reinforcement, which can be an incredibly powerful way to establish norms. Elevate and recognize ideal behaviors. Help people see new ways to achieve results. In an outcome-focused industry, take the time to emphasize the process and path taken.

Explicit incentives are the incentives we often focus on. They include contractual or monetary commitments, like your salary, equity, and other benefits. They also include role changes or promotions.

Implicit incentives are more difficult to see, but are equally powerful. They include opportunities, enrichment, approval from founders, and social recognition (a common challenge with growing teams and first-time founders).

Startups I advise often tell me stories like this one, where a smart design leader has studied best practices and put great thought into shaping a nascent team:

A design executive does everything “right.” They have the perfect process, critique, role definition, and growth opportunities. Their team is thriving. But then, a designer with a close relationship to the founder bypasses the process and management and goes directly to the founder for approval to ship their work. The work is great, so the founder supports it and drives it forward.

This doesn’t seem like a huge deal at the time, and it’ll make the product better. But suddenly, the process starts to break down. More designers bypass their cross-functional team members or miss critique meetings. The new, implicit incentive to ship and please the founder is a powerful one, and the culture begins to shift.

It’s important to recognize the incentives that already exist in your organization — explicit and implicit alike — and proactively design the ones you think will have the desired outcomes. Then keep a close eye on how they drive behavior. Sometimes the best intentions to reward one-off behavior can send confusing or conflicting messages to your team.

Designing rituals is one of the best ways to introduce new behaviors, but more importantly, it creates a shared identity and keeps desired behaviors alive.

Example: IDEO Tea Time*At IDEO, small creative teams often form around a client project and get assigned their own dedicated space for the project. They can use that space however they wish, making it one of the most productive ways to work for that team. *

But at one point, the leadership team realized that dedicated spaces were contributing to so much focus that teams weren’t collaborating across clients as much as they should. As a culture that deeply believes in the value of collaboration, learning, and helping, we’d almost walled ourselves in.

The Experience Team (yes, a team completely dedicated to creating a good environment for employees) started something that became a ritual every Wednesday afternoon. Shortly before it started, you smelled the wafting of baked goods. Then a cow bell rang to bring people together. We called it “casual collisions” — when IDEOers working on different projects or different industries shared what they were working on and what inspired them. It often sparked dialogue across teams for days afterwards.

Again, these rituals may seem small, but they matter and they certainly add up.

Physical artifacts (and sometimes digital ones) can be great visual reminders of what organizations value and do together that drive great culture. I don’t need to elaborate much here because it’s done well across tech. 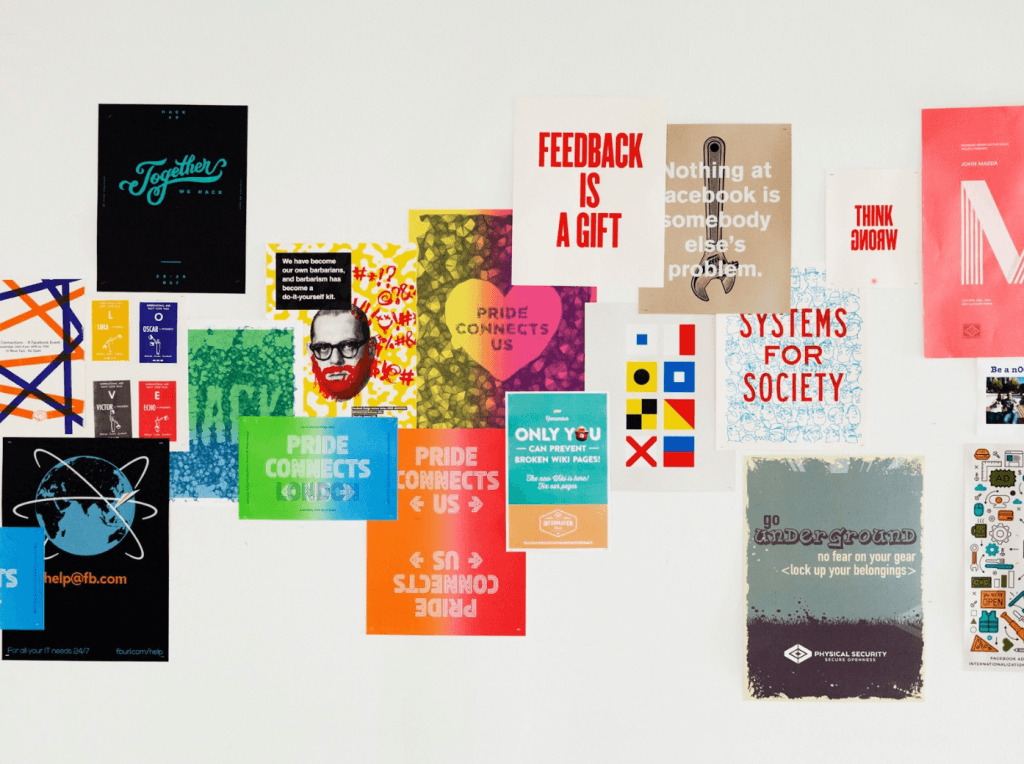 For example, Facebook created the Analog Research Lab, a physical space to make things with your hands. Pinterest and Airbnb focus on their office decor and literally design their values into the space and walls. And almost every startup puts posters around the office with snappy sayings about what the company does or believes. (Again, artifacts are important, but don’t stop there — they’re only one element of your system.)

Get your leaders to buy in to the idea that shaping culture is a worthwhile and time-consuming part of your role. And you should also collaborate with them on designing the elements in your system. If you do, they’re far more likely to commit to behavior changes when they understand the implications. So invoke their participation.

The first (and likely most important) part of this is inviting them into the conversation and showing them how their actions impact others down the line. They don’t always see the challenges of teams “on the ground,” and need your help. They also want to see results, so position your culture-shaping activities as experiments with built-in ways to detect success. For instance, the first month of Pinterest Studio Nights had great buzz and a long waitlist. People were excited, engaged and asking for more. This engagement was our signal to leadership to keep investing.

You also must extend your efforts to parts of the system outside the design team, and engage cross-functional leaders. If you operate as a design silo, you won’t be successful. You have to look more broadly as leader if you truly want to change the system.

When you tweak an element in your organization, you can’t predict how it will affect the larger system. Don’t let this deter you. Move forward with intentional changes and just make sure to observe, experiment, and iterate.

Cultural change may not always be perfect the first time around, but eventually you’ll get to a good place. What emerges will be unique, contextual, and based on the elements that you designed, plus a bit of organic stuff you can’t control. But that’s pretty beautiful too, right?

Building Design Teams From the Ground Up