Matt Brown is a designer and photographer who divides his time between the two with his design consulting practice and fine art photography. Previously, he worked at Pinterest as a product designer and at Facebook on the branding team. Before that, he ran a small design agency with his wife, Tiffani Jones Brown. In between his time at Facebook and Pinterest, he took a four-month break and began to make books of his photography. After Pinterest he created the photo app Darkroom with engineer and designer Majd Taby. Matt’s explanation on how it all got started sounds like magic:

We talked for 5 hours straight, got a drink, and shook hands on it. I woke up the next morning questioning if it was too soon, but by the end of the week we had a company set up. 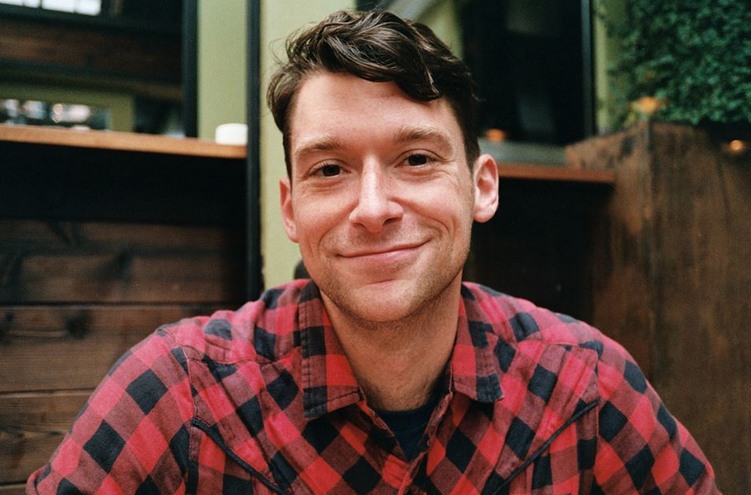 How did you start Darkroom and why?

It was a lot of chance, to be honest. I had always wanted to make an app. Working at companies like Facebook and Pinterest you get to work on apps, but at a certain point they are not “yours” — you contribute to the shaping of that platform, but you are not building something from the ground up—for a long time I knew I wanted to do that, but I had never chased the opportunity hard enough. I didn’t have the confidence to make the jump.

I left Pinterest last year to do consulting work and more artwork, I’m building a life where I can do a little bit of both. Two weeks after I left, though, I met up with my friend Majd, and he showed me a demo of what we ended up launching as Darkroom, in a rough form. Immediately, I was interested. We talked for 5 hours, got a drink, and shook hands on it. I woke up the next morning questioning if it was too soon, and by the end of the week we had a company set up.

We received a lot of support from our friends, and through them got some free office space downtown. We spent the next six and a half months taking Darkroom from an idea to launch. It was a Herculean effort for just the two of us. We did all the branding and marketing, Majd handled the brunt of the engineering work and rebuilt the image processing aspect twice. We redesigned the app itself at least three or four times. Wearing all the hats during this process helped us realize where our gaps were — what we were good at and what we were less good at. 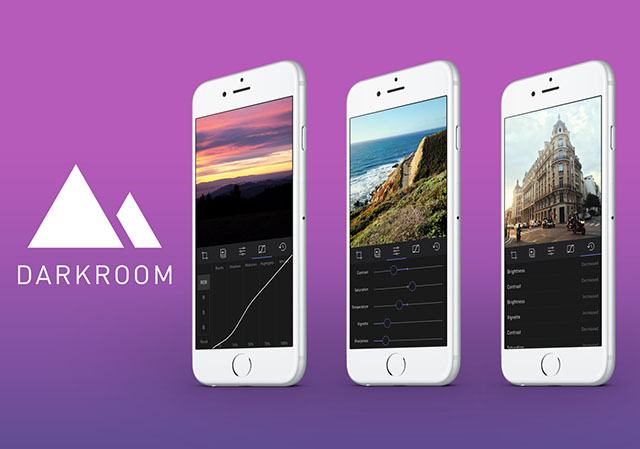 Darkroom: a dynamic photo editor that includes curves. Brown and Taby took the app from idea to launch in six months.

What were some of the gaps? I had done a lot of branding and marketing work at Facebook, a little at Pinterest, and some when I ran a small agency with my wife, but I had never led a launch. When you work at places like Facebook and Pinterest you can take for granted the fact that you’re working on a team of experts. It’s thrilling to do it yourself, and you learn how hard it is. A couple months ago, left Darkroom. It was hard to leave because I really like working with Majd, but for me the challenge was making the app and proving that I could do it.

Why did you start making photo books? I’ve taken photos my whole life, but had never done anything with them. I’ve never studied photography seriously (a few classes in high school and college), and I’d never made a book before, either. For me the question was, how do I gain  confidence to do some of these ideas I have, and how do I execute them in a form I feel comfortable with? For me the form ended up being small books, zine-style, digitally printed.

I’m a big fan of Ed Ruscha and a lot of my projects are influenced by his small book work. As a starting point, I began to emulate his forms and ended up self-publishing several books.

First was the China book. I went on a trip China and had grand ambitions for an amazing photo book from that experience. I wanted it to be ambitious, something no one had seen before: a combination of experimental graphic design and a new take on the photography book. But I had never made a photo book or a graphic design book before and had no idea how to do that. My illustrations weren’t good enough, I couldn’t make it look the way I wanted. I was struggling with the project and I was frustrated.

During that period of frustration, I came across some some photos I had taken two years earlier at my family’s house. They were straight-forward images of vintage toys from my Dad’s childhood. I thought the pictures looked great, and was inspired to make a quick book. I called it Toys, Guns and Fireworks, which is an Ed Ruscha-esq name. I spent three hours laying out the book, and printed it that day. I got it back 5 days later, and I freaked out. I had so much fun with it because I wasn’t trying to solve anything, I was just trying to do something that was self-contained.

After I made Toys, Guns, and Fireworks, I was less worried about the China book. I realized my expectations for the China book were not aligned with the reality of the images I had, and I committed to simply making the China book a travel log and gave myself a week. You have to be honest with yourself about what kind of photos you have to work with and that helps determine what kind of book you will make. 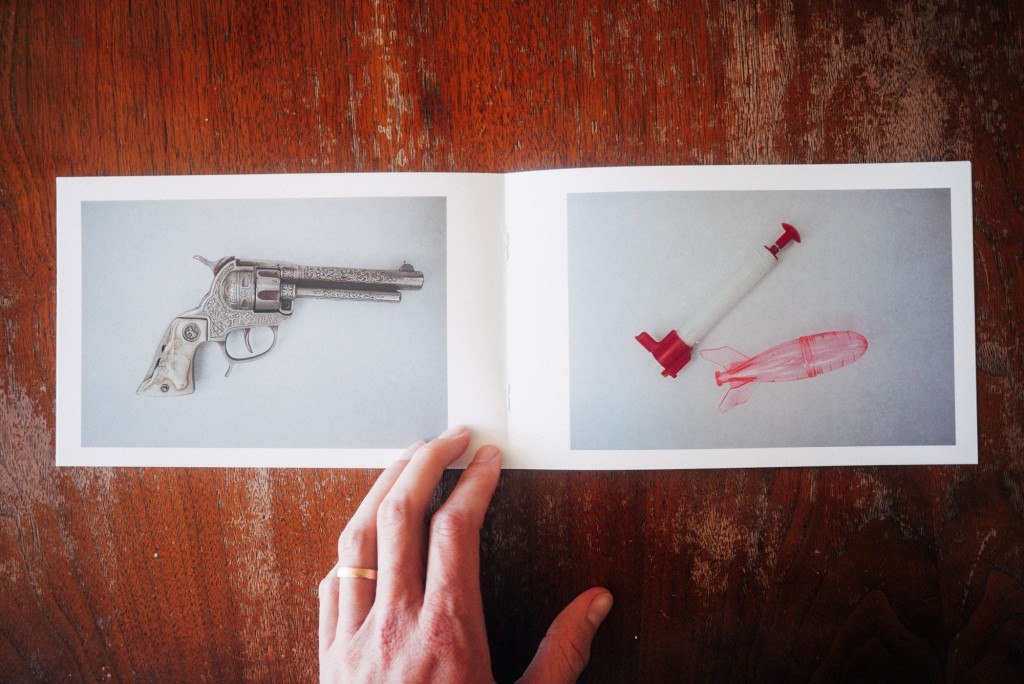 A spread from “Toys, Guns, and Fireworks” a book cataloging vintage toys from Brown’s childhood home.

Another book came from two-week road trip I took before I went to work at Pinterest. Also inspired by Ed Ruscha, it’s a collection of portraits of every person I gave money to on the trip and it’s called People I Paid.

Where did the impetus come from to want to make the China book a “grand photo book”? Silly ambition and delusions of grandeur. For me it was a lesson in the relationship between aspirations and doing the work.

It’s a balancing act, you have to produce easier, scrappier work in the short term and that keeps you in the rhythm of making, which will help sustain your energy on the big thing.

The cliche is “you can’t always be working on your first novel” — you don’t want to be like Michael Douglas in Wonder Boys.

What did you learn at Pinterest that is contributing to your work now? Working at Pinterest gave me the confidence and skills to attempt Darkroom. Before Pinterest I had only dabbled in product design. I worked on the growth team and I learned a lot of product design there, and how to work with a team. One of the most interesting projects I did at Pinterest was for a hack-a-thon, and it was a photo zine.

I spent an hour taking pictures of people and I used a lot of flash, Terry Richardson style, and printed it on a copy machine. It was a slice of life at the company. I was really happy with the book, and we made about 50 of them. It was one of my favorite little projects. It reminded me that photography is a calling for me, it was really nice to do that in a context of this other job I had. 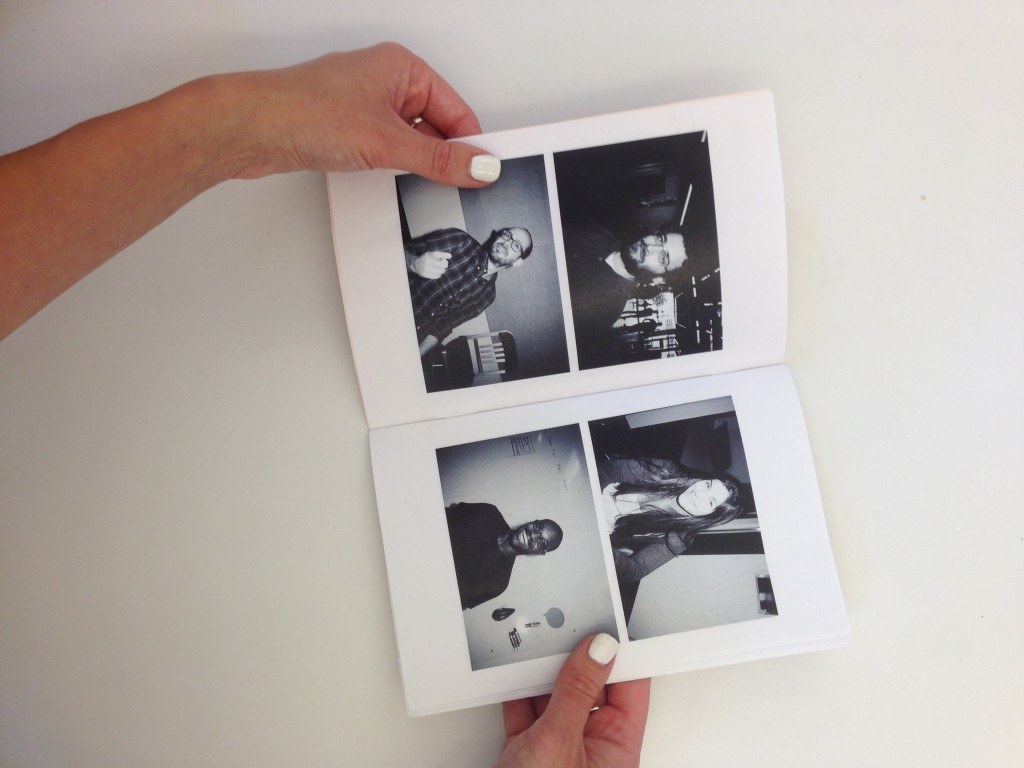 Titled “808 / 572” after their office address, Brown made this zine for a hack-a-thon while employed at Pinterest.

What kind of advice do you have for people who are embarking on a side project? Just read the book Flow by Mihaly Csikszentmihalyi.

He nailed it. It has to be outside of your grasp, but you have the ability to do it.

You have to be able to iterate on it, and get feedback along the way. You need to have a real deadline that you can’t back away from.

I wish it was more complicated, but the hard truth is if you follow Csikszentmihalyi’s advice, it works. I have many projects where I don’t set those conditions and the project doesn’t get done.

Something else I learned happened about halfway through my time at Facebook. I felt frustrated because I didn’t have an outlet for these side projects and started keeping a “digital dump” of everything. Any idea, no matter how trivial it seemed at the time, was recorded. I would write it down, make a comp or sketch, and file it in a Dropbox or text file. The trick for me was anything I logged more than once was important.

Setting up Conditions to Optimize Your Side Project with Matt Brown

—Put yourself in situations that create half blinding insecurity, and half total excitement.

—Create situations for which you have no choice but to do the work. This one is hard. I’m not naturally self-disciplined, so I have to set up situations where I have to get things done. For example, setting up a project with a Kickstarter makes me accountable to an audience and a deadline.

—Honor your project time. Personal time can just be burned away really quickly if you don’t treat it like it’s real work.

—”Do it for the love” but don’t expect to feel joy the entire time. Just because it’s rewarding doesn’t mean it’s fun when you do it, it’s sometimes painful and that’s OK.